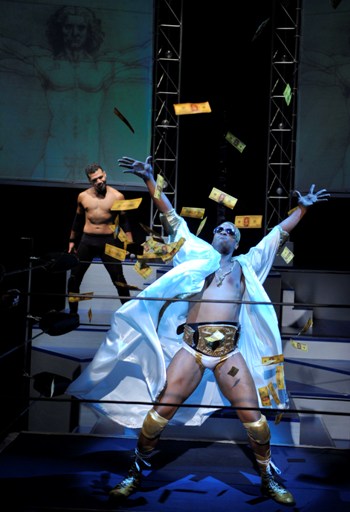 The smell of the greasepaint; the roar of the crowd; the jingle of money and the flash of the lights… No, it’s not a circus or a Broadway spectacle. This is professional wrestling, folks. It’s as fixed and phony and, yes, fun as either of the above, especially as depicted in “The Elaborate Entrance of Chad Deity,” Kristoffer Diaz’s comedy with some sad social overtones now in a splendid production at Aurora Theatre Company in Berkeley.

The tiny Aurora stage is taken up by a wrestling ring. Huge video screens serve as the back wall, showing scantily-clad, gum-chewing cheerleaders and playbacks. The entire theater is ringed with flashing Las Vegas-type lights in red, white and blue. The sensational set is by Nina Ball; Jim Gross did the videos and Kurt Landisman designed the lighting. Caveat: don’t be late or you may be caught in a pre-show that’s as raucous as it is funny. Fight director Dave Maier, who also plays a series of wrestlers known as “The Bad Guy,” “Billy Heartland” and “Old Glory,” instructs the audience in the proper responses — when to cheer, when to boo, when to salute and when to chant “Champ, champ, champ.” This information will come in handy from time to time as we are given our cues and Maier, as Billy Heartland, conveys it amusingly.

When the real play — a 2010 finalist for the Pulitzer Prize — starts, it’s a bit of a monologue as Macedonio “The Mace” Guerra (a sympathetic Tony Sancho), tells us of his lifelong devotion to what he describes as an “art form.” Even though Everett the promoter (a delightfully sleazy Rod Gnapp) “writes scripts that tell me to lose … it’s a good job and I am in love with who I am,” he says. Who Mace is actually is the guy that makes the reigning champ — Chad Deity, a gold-bedecked walking ego who turns out to be not quite as dumb as he looks — look good. Mace gets pinned; Chad (who really is a lousy wrestler) gets to put his gold sneaker on his opponent’s chest; the fans go wild and run out into the lobby to buy souvenir T-shirts, and so it goes in the world of “The Wrestling,” loosely based on the former World Wrestling Federation, now known as World Wrestling Entertainment. And entertainment it is — especially with pay-per-view — as well as big business, as Everett keeps reminding everybody.

Beethovan Oden has a wonderful time portraying Chad, boasting of his fame, wealth (measured by the fact that he has no less than four crispers in his refrigerator) and drawing power. “Charisma owes Chad money,” he notes. But the play is not really about him or about the avaricious Everett, well-drawn as both characters are. They are the winners and this is a tale of losers. When Mace, a Puerto Rican from the Bronx, teams up with Vigneshwar Paduar a.k.a. VP, a rapping, charming, womanizing Indian from Brooklyn, it looks to be a game-changer. VP, one minute brooding, the other swaggering, is hilariously portrayed by Nasser Khan.

Since it’s all about the script and invented personalities anyway, Everett decides to cast VP as “The Fundamentalist,” a terrorist who will bring out the jingo patriotism in the crowd. “We’re just action figures,” bemoans Mace, who is required to be “Castro,” a sombrero-wearing revolutionary from Mexico. But VP has other ideas. and here’s where the script veers dangerously toward polemic. Yes, he and Mace are ethnically stereotyped underdogs — both in society and in the wrestling ring — but playwright Diaz hammers the point home a bit too hard. The ending too is disappointing; coming about as a one-liner, almost as though the whole play has been the run-up to a joke.

But it’s all so clever and entertaining; it’s not too much to wrestle with after all.