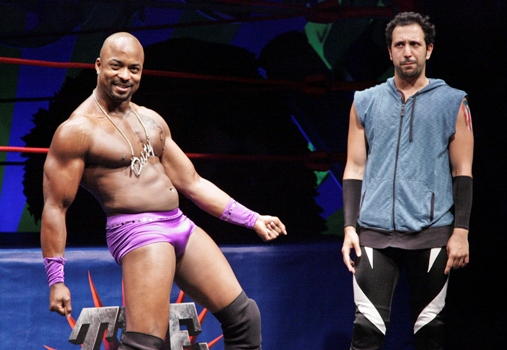 Kristoffer Diaz‘s body slam, “The Elaborate Entrance of Chad Deity,” is two hours of in-your-face and overload-your-senses sensations. Commercial wrestling is the allegory here for hucksterism, racism, and all that is shallow and false in American life. It may be an allegory but it is a humorous one. Most of the Bronx/Hip hop dialogue (and monologues) comes at you at a David Mamet pace.

Now, I am not a wrestling fan—certainly that is not a surprise. There probably is not a large overlap between wresting fans and theater audiences. However, a colleague who owned having taken his son to several matches years ago, says that “Chad Deity” is true to the sport and some of the characters are actually recognizable; Diaz has displayed his bona fides well. Start with Brian Sidney Bembridge’s set, an authentic wrestling ring, add some impressive bodies, and I am convinced.

So here we have the authentic representation of an inauthentic sport. Are you with me? Itis no secret that most of professional wrestling is staged. The fighting is orchestrated and the characters themselves are purely fictional personas, which the fighters maintain publically in and out of the ring. In the business they even have a word for the elaborate staging: kayfabe. Do not whip out your dictionary, you will not likely find it. Wikipedia, where you will, explains, “a wrestler breaking kayfabe during a show would be likened to an actor breaking character on camera.” In the theater when an actor directly addresses the audience he is breaking the fourth wall. To some, like critic Charles Isherwood, breaking the fourth wall breaks the spell of the drama and is an overused device in contemporary theater. I do not agree.

You can see that kayfabe and breaking the fourth wall have a lot in common. In “Chad Deity” kayfabe is kept, but the fourth wall is broken from the start by monologues from Mace (Desmin Borges), the Puerto Rican fighter whose job it is to make the stars look good and who is the guy who gets slammed in the ring again and again to accomplish that goal. In reality he is the one who does the heavy lifting. His is the hard job, the one that takes the skill but does not get the glory. Chad Deity (Terence Archie) is the gorgeous African-American hunk that Mace makes look good in the ring.

Mace opens with a recollection from childhood of playing with his two brothers before watching wrestling. They had the gorgeous-looking action figures that could not move. Mace had the less glamorous ones that could bend and really simulate the fight. From childhood he admired the finesse of the fall guy whose job it is to take the shots and make the other guy look good. He loves wrestling and he knows it is all fake, but says “You would not stay away from ‘Swan Lake’ because you know in the end the swan will die.” You would not, would you? He wants us to understand his world and he can speak to ours, albeit with his own vocabulary.

Deity enters with a blast of sound and light and four large screens surrounding the stage on which his rock-star life is shown, replete with women, fancy clothes, big cars, and blaring sound. He is dressed to kill, topped off by a huge, and I mean huge, gold necklace that spells Chad Deity across his chest. He puffs and preens, believing his own make-believe story. If you look closely—and there are multiple opportunities to do so—his well-muscled body looks well-tended and soft to the touch. It is not his job to do the heavy lifting; his job is to look good. Oh, does he love looking good.

EKO is the slick and slimy owner of THE Wrestling, the operation that runs professional wrestling. Mace meets fast-talking, smooth-operating, Bronx-raised Vigneshwar Paduar (Usman Ally) and develops a story for him. Mace brings Paduar and the story to EKO who, in the end, agrees the story is good and names the Indian, who looks fresh off the street but can speak five languages, “The Fundamentalist,” draping him in an imitation Muslim costume with a fake beard to take advantage of the current fear of terrorism. Does EKO like this particular kayfabe set up? “I don’t like anything. I like what’s good for business.” It goes with EKO’s shiny suit and the too bright teeth. One fighter anointed as “Old Glory” is clad from head to toe in red, white and blue; he races down the aisle and, with his monumental American flag, leaps onto the stage and into the ring. Another is the “Bad Guy.” Even the theater audience boos when he appears. Mace himself is recast as “Che Chavez Castro,” bedecked in comic-book Mexican style, replete with enormous black sombrero and two ammo belts crossing his chest. It is clear that the elaborate stereotype setups are designed to cash in on latent and not-so-latent racial prejudices of the wrestling audience and, by implication, most of the rest of us. None of the messages are hard to get.

There are enough body slams, power bombs, and leaps onto the ropes to keep the story real (credit director Edward Torres for moving the show and all its parts along briskly). But the frequently pulsing energy at times turns “Chad Deity” into more of a happening than strictly a drama. Could it have been told in less than two hours? I think so. The monologues, in particular, could take some trimming. Could it have sacrificed a decibel or two? I think so. Did I love it? Not really, but I would have hated to have missed it. It certainly is entertaining and freshly told.