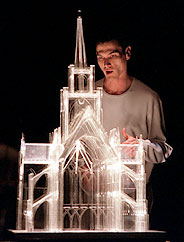 The current production of The Elephant Man is curiously out of balance. It strains to soar into the realm of mesmerizing theatrical magic with brilliant acting by Billy Crudup in the title role, but it is tethered by several threads of timing, performance, and script that do not let the evening as a whole fly nearly as high as its leading actor.

The play received its first New York production off-Broadway in 1979, and then moved to Broadway to run from 1979 to 1981. The very existence of Joseph Merrick, a horribly deformed man known as the elephant man, was a newly shocking bit of Victorian trivia. The next year audiences world wide became aware of the "elephant man" through the film, directed by David Lynch. To make all this seem somehow new and fresh today takes something—a gimmick, perhaps.

It is to the credit of Billy Crudup and director Sean Mathias that they chose no gimmick at all, just an exquisite display of the actor’s craft. With no prostheses or padding or visible makeup, Crudup creates Joseph Merrick (called John in the play), a man who is painfully deformed and truly ugly. As the story unfolds the ugliness seems to fall away as the inner sensitivity and beauty of the character is revealed. Although his deformity keeps him from speaking properly, he is able to utter more and more poetry, wisdom, and wit. Without mask or padding, the actor’s face, body, and voice are left unimpeded to reveal the character. The absence of mask also allows Merrick to be a mirror for each of the main characters of the play, each of whom sees some feature of his or her own personality reflected.

Unfortunately, Crudup’s dazzling performance is in a play that is flawed. Today, with most people knowing at least the outlines of the story, the surprising story-telling element of the play is not nearly as strong. There is virtually no suspense. Once Merrick is taken in by Doctor Treves and given a home in London Hospital, there is no real threat that he will be forced back onto the streets. Funds to support him flow in, the rich and powerful want to come and visit him, one or two even want to befriend him. His life now is not perfect, but he is certainly much better off than he had been.

But, and the play makes much of this, he must obey the rules. "If I abide by the rules, I shall be happy," Treves makes him repeat over and over. In the midst of obeying the rules, Merrick exercises his creativity as he builds a lovingly detailed scale model of a cathedral and forms a more or less loving relationship with Mrs. Kendall, a famous actress. He eats well, is given expensive gifts, and gets free medical care. But—and the playwright seems to want the viewer to believe this is particularly onerous— he has to obey some rules. This obeying of rules is apparently meant to comment on the limiting strictures of Victorian—or perhaps even today’s—society, but the notion is banal.

The famous actress is played by Kate Burton, who starred on Broadway last season in Hedda Gabler. Burton gives the character a fascinating sense of depth. First seen as a strutting, overdressed, self-consciously witty but apparently shallow woman, she slowly morphs, through her growing relationship with Merrick, into a fully dimensional, flawed, yet beautiful woman. She is even willing, in an act that Doctor Treves sees as horribly immoral, to relate to the man beneath the deformities in a sexual way. Burton is in complete control of her actor’s craft, playing each emotion, each new level of her relationship with Merrick, to perfection.

The least effective of the leading three performances is Rupert Graves as Doctor Treves. Although the character must seem more and more uncomfortable in his own skin and his own mind, Graves seems uncomfortable in the role itself. This is partly due to the play; he must deliver a long, rambling monologue that stops dead the forward motion of the story and adds nothing of much interest. Neither the character nor the performance are compelling enough to sustain his going on at such length about the crumbling of his inner life and an incipient nervous breakdown.

The story of Joseph Merrick could be powerfully told in a one character monologue delivered directly to the audience by an actor with the art and craft of Billy Crudup. In this production, almost everything other than his performance seems, while sometimes mildly engaging, somehow beside the point.