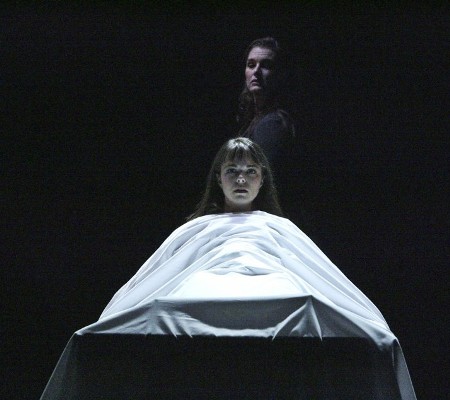 If you are planning on going to the Geffen, it helps to have missed the 1973 movie “The Exorcist,” and also never to have read the novel. Do not ask how I pulled that off; it could have been a consequence of my 1970s’ misguided effort at being Wonder Woman. But miss them I did, so the first 15 minutes or so of the current Geffen production hit me more favorably than it struck some other critics. I was taken in by Scott Pask’s striking set: a quasi altar-like screen and table that also doubles as an apartment and a doctor’s office. I was similarly captivated by Jane Cox’s dramatic and expressive lighting design that almost functions as a member of the cast. Demons chant, holy-like, through the altar screen, and director John Doyle’s conception of an otherworldly experience in the here and now captivates. That is, it captivates for those first 15 minutes.

What might have sustained my interest longer would have been if I were a Catholic, lapsed or not. But that, alas, is not in my DNA. Much of the back and forth for the remainder of the intermission-less 90 minutes involves various issues of theology, such as what is the real role of Satan, his history, existence, and whatnot. These are matters that someone immersed in the theology from childhood could find fascinating, I guess. However, little that transpired managed to suspend my disbelief or engage my curiosity.

Anyone who has been a parent can identify with the anguish of Chris (Brooke Shields) whose daughter has morphed from perfect angel to monster and Chris’ desperate search for someone— anyone— who can possibly help her child. How she morphs from self-proclaimed atheist to a mother calling for an exorcist, well, that is another story. Shields, actually, does not morph well. Totally believable in the first few scenes, she becomes wooden in the face of the mumbo-jumbo, more like an actress who needs some coaching than a mother struck dumb by terror.

Father Damien Karras (David Wilson Barnes) is a Jesuit psychiatrist. Skeptical Father Damien is in his own throes of religious self-doubt. He is a well-drawn character who stays real more effectively than most of the rest of cast of characters. Burke Dennings (Harry Groener) is the little girl’s uncle. He is shaken by what he has seen. He seeks out Father Damien, who rather improbably discloses more about his own crisis of faith than would be expected in a board-certified psychiatrist, useful in moving the narrative forth. But never mind … actually you have no choice; it is part of the whole preposterous premise. Ultimately Father Damien agrees to see Regan (Emily Yetter), the little girl who by now is writhing suggestively and speaking gibberish. Father Damien tries to interject some notes of sanity, such as pointing out that much of the gibberish is English spoken backwards … try that trick in your spare time. But mother Chris becomes adamant that Regan needs an exorcist.

Ta da! Enter Father Merrin (Richard Chamberlain). Actually we met him right at the start, proclaiming that anyone who doubts the existence of Satan should recall Auschwitz, Cambodia, and Somalia. Chamberlain carries off the role with dignity and compassion. Somewhat reluctantly he carries out the exorcism and, lo and behold, Regan, the angel child is back with her mother. Of course there is much appropriate drama, another casualty of the child’s possession, and a couple of twists before this occurs, but all’s well that ends well … almost. To say more would remove the small element of surprise.

As I said, there is an advantage in not having seen the original. Playwright John Pielmeier was emphatically not trying to recreate the movie. Having seen none of the special effects of the 1973 film, I can say that John Doyle’s staging was very satisfactory. The one touch added by consultant Teller (that Teller, of Penn & Teller) was a treat. With all the kudos one can bestow on the staging, the material is pretentious and sanctimonious. The question that remains in the end is not philosophical; it is why bother redoing “The Exorcist” at all?