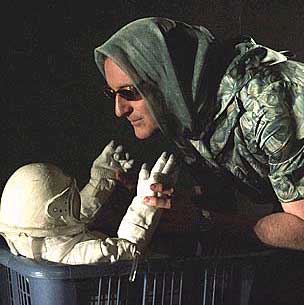 First performed at Le Theatre du Trident in Quebec in 2000 and touring ever since, Robert Lepage&#146;s The Far Side of the Moon is a spellbinding piece which takes its audience on many journeys. Though there are no allusions to Stanley Kubrick, the play is an odyssey in space, a voyage across spiritual and emotional voids in the lives of two fortysomething Canadian brothers following the death of their mother. The distances between them are explored metaphorically through the playwright&#146;s reference to the space race of the 1950s and &#145;60s, with an emphasis on the largely unheralded Soviet side.

This subject is the particular obsession of Philippe, the elder of the two brothers and principal character in the story. As Lepage mischievously remarks in the opening scenes, the American predilection to refer to the dark side of the moon as &#145;disfigured&#146; may have as much to do with the fact that the craters which mark its surface are all named after great Russian artists and scientists. This play is about the dreams and disappointments represented by such &#145;disfigurements&#146; as they are visible in the lives of these two men facing the empty spaces in their adult lives.

Poignant, funny, endlessly inventive on a technical level, The Far Side of the Moon is an affecting study of human emotions grounded in a world filled with frustrated aspiration. Philippe is driven by a longing for something other and more which can connect him with something greater (especially now that his mother has died), a desire exemplified by his obsession with the SETI program. Delivering a doctoral thesis presentation in the opening scenes, he observes that the desire to explore outer space was driven more by narcissism than curiosity, a reflection upon human relationships which is self-consciously applied to his view of his own life.

The script has been written with a clear ear for naturalistic rhythms, but is not limited in the richness or depth of its content. Lepage takes a relatively simple set of reference points and constructs an insightful and moving drama around them, and though the metaphoric linkages between them are far from subtle, they work. The transitions between character drama and documentary exposition are not obtrusive, especially notable given that &#145;naturalism&#146; is a relative term in the theatrical space created by Lepage and his team of collaborators in the Ex Machina company.

The set, designed by Lepage but pooling the resources of Ex Machina, is a remarkable creation. Masked into a letterbox shape which contributes to the &#145;cinematic&#146; look of the production, the stage space is as alive with movement and meaning as the script. A horizontal divider comprised of individual sliding panels mirrored on one side is used to create a variety of locales, including rooms, wardrobes, an elevator, lecture theatres, an airplane interior and pretty much anything it needs to. This divider also revolves and can even be raised up to create different ceilings. When matched up with several conveyor belts and a significant porthole which serves as a washing machine door in the opening scene, only to morph into a space capsule and metaphorical birth passage, this set seems truly capable of delivering meaning &#145;out of the machine&#146;. Evidently expensive and requiring precise timing and co-ordination of the multimedia projection also used to illustrate the action, it would all mean nothing were each of its increasingly impressive convolutions not inextricably bound to the dramatic core.

This revolving, evolving, virtually living space is anchored at all times by lone actor Yves Jacques. His is a performance of exquisite delicacy, capturing the disconnection, alienation, and loneliness of postmodern life though posture, gesture, and intonation every bit as breathtaking as anything the set does. The actor plays several characters, all of whom are cut off from one another in space and in emotion, and his handling of the many scenes of conversation between them, especially on the telephone, or, in one case, in a bar where Philippe awaits famous Russian cosmonaut Alexi Leonov, is extremely skilful. The audience needs only to hear one half of the conversation to grasp the complexities and nuances of human communication. There are one or two genuinely heartbreaking scenes, though there are others which are purely &#145;poetic&#146; in which Jacques gets to demonstrate his physical dexterity and grace. The finale in particular, in which the actor does a virtual space walk with the aid of a mirrored ceiling at an acute angle and furniture resting on the floor, is a sublime fusion of performance, direction and set design.