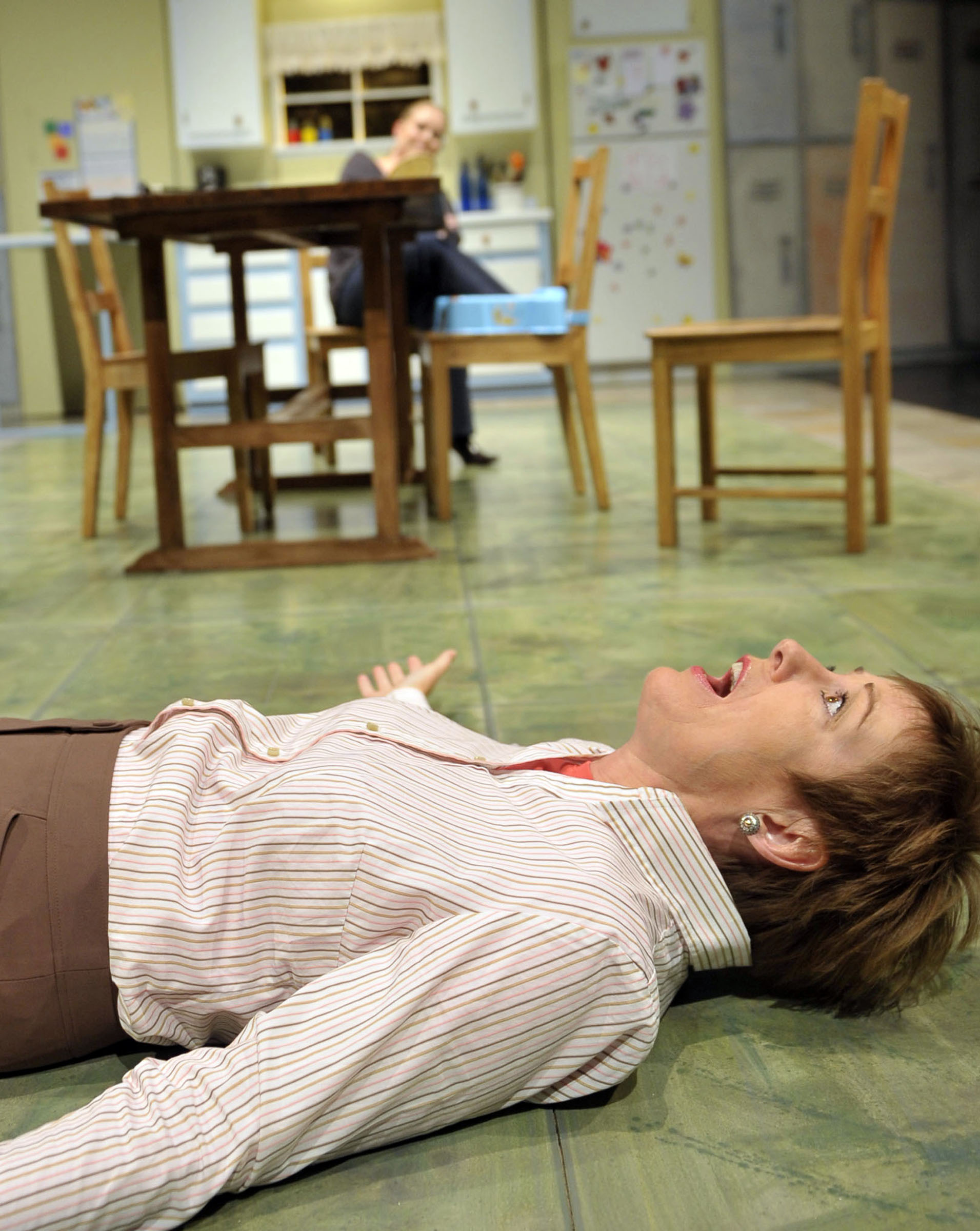 Sydney (front, Julia Brothers) asks her daughter Angie (back, Rebecca Schweitzer) for help getting up in The First Grade. Photo: David Allen.

Aurora Theatre gets high marks for “The First Grade,” a hilarious comedy with some serious underpinnings by Chicago playwright Joel Drake Johnson. Johnson himself gets a gold star for sharp, incisive dialogue and the spot-on cast goes to the head of the class. The author, associated with the venerable Victory Gardens ensemble and four-time winner of Chicago’s most prestigious theater award, was a teacher for 30 years. But don’t think this is a story about six-year-olds in school. It’s an adult story about adult relationships – husbands and wives, parents and children – and how they become unraveled.

Sydney (the wonderful Julia Brothers) has problems. Funny, smart and neurotic, she is a middle-aged schoolteacher dealing with hot flashes on one hand and a cold shoulder from the disillusioned and desperate daughter who has come home after the end of a bad marriage on the other. Angie (Rebecca Schweitzer) is not the only one dealing with divorce. Sydney and her alcoholic husband (a delightfully acerbic Warren David Keith) also have split, although they still live together in the house, pending its sale. Their post-marital kitchen banter is a highlight of the play.

Sydney also has arthritis. She has it bad. When she seeks help for her pain from a physical therapist, Mora (Tina Sanchez), she discovers that the overly-cheerful Mora, too, is in a problematic marriage, one that may present danger to her and her two little kids. The older woman, who, up to now, has been dealing with life through a combination of Xanax, cookies and sarcasm, offers to help Mora. And that’s when it hits the fan. The young woman shows up on Sydney’s doorstep late one night, ranting about her abusive husband, an Iraqi vet who has lost a leg. But is the perky little therapist telling the truth? Not according to her husband (Adrian Anchondo) who tracks her down with his father (Paul Santiago) in tow. An explosive confrontation on the front lawn ensues and the police are called.

An example of the superb casting comes up here. Anchondo and Santiago are fantastic and totally believable, bringing a fresh note of reality into the somewhat surrealistic situation. Their parts are little more than cameos but they really make their stage moments count. Kudos to the playwright too, who has Santiago, playing the older man, deliver all his lines in rapid, impassioned Spanish, leaving the son to translate. The device really drives the scene. But just about every scene, expertly directed by Aurora’s artistic head Tom Ross, is a delight.

Nina Ball’s set design combines Sydney’s classroom, her home, the therapist’s office and the front yard in a clever and colorful way. Ted Crimy’s sound brings us right into the schoolroom. If you have a taste for horrendous happenings told in a hilarious way; for clever writing and terrific acting; I suggest you sharpen your pencils and enroll in “The First Grade.”