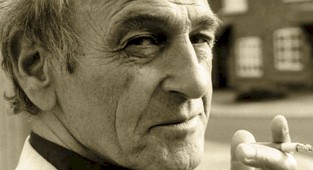 Tom Murphy&#146;s deconstruction of affirmational therapy and the culture of pseudo-psychoanalytical holism was first performed in 1983. The date is of no particular significance, as the play is devoid of specific social or political references. It is not without context though. Some of its points about the spiritual void in an increasingly agnostic Irish culture and some of the incidental detail about the real-world power wielded by the building industry are concurrent enough to make it relevant today. It is a play about psychological and emotional blockage, the hindrances to self-expression which result in unease and a sense of dislocation within postmodernism. Its overall vision is of a process of curative treatment which is easily identified in an Irish setting: exorcism by confession through a haze of half-truth and alcohol.

The action takes place in the office and residence of one JPW King (Mark Lambert), an English expatriate working in Dublin on behalf of the &#145;Dynamatology&#146; organization; a "self-realization" group, which, for all King knows, may not even exist anymore. He has few contacts apart from a distant, sought-after woman he speaks to on the phone (which he illegally reconnects to the mains when he needs to call her), and a nymphomaniacal housewife (Catherine Walsh who seeks his companionship from time to time ). He starts the day wondering how he is going to get through it and he drowns his sorrows in vodka at regular intervals.

Into this sordid little setting one day wanders an initially unnamed "Irish Man" (Owen Roe), a building contractor, it turns out, who is suffering from depression. This man harbors a desire to sing like tenor Beniamino Gigli. It is apparently a life&#146;s ambition frustrated by the constraints and successes of his roles as a businessman, husband, and father. He has come seeking help, but is suspicious of psychiatry and psychology. His custom throws a lifeline to the Englishman and the sessions between them become as much about finding out which is more lost as is is about either of them achieving catharsis.

The play begins hesitantly, almost awkwardly, charting the initial meeting between the two men and the obvious clash of cultures, personalities, and life experiences. The awkwardness gradually gives way to the halting development of a complex psychological and emotional dynamic between the characters which becomes increasingly fluid and intense. Murphy therefore melds the rhythm of dialogue and the pace of characterization. Each step along the characters&#146; mutual journey is marked by a separate scene. Each features a different level of detail and revelation, and the play becomes increasingly skeptical of the analytical frameworks being applied by the &#145;Dynamatologist&#146;. As the two men communicate with each other more clearly and more frankly, it is not so much anything to do with the flow-charts and psychobabble as it is a reaching of levels of mutual understanding (and misunderstanding) inevitable with the sharing of several bottles of vodka and memories of the past.

The play delves into the forms and meanings of self-expression. It is an interrogation of the possibility of &#145;self-realization&#146; in a world defined by roleplay, denial, and unrealistic expectations. Recordings by Gigli are played throughout, taking on different complexions depending on the moment and on the characters on stage at any given time. Though they initially seem to represent an understandable aspiration to make one&#146;s voice heard which has been frustrated by life on the whole, this is revealed in time to be another form of illusion, a convenient metaphor both for the playwright and the characters. A slow process of transference occurs as King becomes as driven to hear the tenor sing as his &#145;patient&#146; supposedly longs to perform like him. Both men are shown to have frustrated ambitions, and neither, ultimately, has anything much to do with Gigli.

Murphy is able to shift his frames of reference very elegantly: ideas which are initially treated with respect are finally ridiculed and some which are first all bluster and bunk are shown to have truths to them. Our expectations of characters are continually challenged as they get closer to the genuine core of their experiences, and there are some powerful revelatory moments near the end. Though the structure sounds conventional, the dialogue is intricate and complex enough that it too confounds expectation. It does make something of a mockery of psychotherapy though, or perhaps, more directly, of scientology. Its real targets however are the intellectual and academic scaffolds used to mask and indirectly confront real human problems, whatever form they take.

Religion, though not directly challenged, is frequently cited. Bible tales and religious references abound, though none of the characters discusses their faith or its role in their lives. As usual for Murphy, this is a secular world in which religion plays the part created for it by human beings. The healing methodologies of Catholicism are evoked by the sense of the confessional and the desire for absolution which drives the characters on some level, yet Murphy seems to steer specifically clear of a religious resolution (the climax, in fact, parodies the very idea of it).

The Gigli Concert is such an involved piece of writing that it makes massive demands on concentration to take it in. Director Ben Barnes has not found any way to make things any less complicated; indeed, the exceptionally large stage space at the Abbey makes the action seem unnecessarily broad. The play feels like it should be more claustrophobic, and it is not clear if the decision to open the space out into a literal and metaphorical attic is a help or a hindrance. Lambert and Roe are both good however, and keep the production rooted. Lambert is required to play a character whose changes are subtle and understated. The actor finds an appropriate balance between pathos and swaggering intellectual arrogance. Roe goes through more obvious transformations in demeanor. The character ranges between menacing and self-assured and a weak, sobbing heap. It is often difficult to know how to respond to him. Roe has tremendous physical presence in the part, and he comes across as entirely believable in a way Lambert sometimes does not. This may be as much to do with the deliberate delineation between the Englishman and the Irishman. Though the play is not infused with a political sensibility, there is too much built-in symbolic weight to this national dynamic to avoid resonance. Walsh is effective in her small supporting role. Her character fulfils an important thematic and narrative function although it does not give the actor much room to impress.