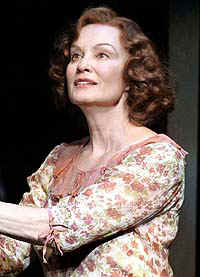 The current revival of Tennessee Williams’ family drama is luminous–a Glass Menagerie with acting and directing so smooth as to be virtually invisible. Put another way: David Leveaux’s masterful direction delivers a newly eloquent version of the play.

Far from the noisy, dominating virago known as Amanda Wingfield, Jessica Lange in the role creates a charming and resourceful woman determined to survive against all the odds of living in a run down tenement in St. Louis. Lange’s lovely voice and dreamy manner bring the southern plantation to that urban ruin, two worlds that will not mesh as they did not for the playwright in his own life. She eradicates the termagant Amanda Wingfield, known from earlier interpretations of this beautiful play, beautifully played by all. Ms. Lange, the woman on the telephone battling the world into ordering subscriptions to her magazine, is heartbreakingly lovely, while her son Tom (Christian Slater) remembers and tells their story. When his poetic sensibility wins out over his reportorial impulse, his tale turns elegiac; but it always stands poised at the edge of lyricism–Tom is already Tennessee Williams.

It follows that plot is not the point and there is not much of it. Williams is inventing his version of the memory play, choosing to draw a picture of the moment when his family, he, mother, and daughter, are still together. Tom, the financial bulwark of the family at this stage of its near collapse, is in any case better at writing poems on the lids of shoe boxes from the factory where he works than at shoring up his mother against financial ruin.

But he does not abandon them, as the father did. Tom, instead, is tender with his mother, Amanda, and protective of his crippled sister, Laura (Sarah Paulson), whose reality their mother resolutely refuses to see. With a nagging, unconscious cruelty, she repeatedly refers to the prospect of "gentlemen callers" for Laura, plainly destined to remain outside such a possibility. Amanda clings to bits of conventional courtship that float along on memory like the disjointed remains of shipwrecked romance, hers, with its vestiges of "forty" callers. Their remembrance brings sentimental tears to her eyes as she glides along on a rosy stream of things past, refusing to see that it moves through an alien reality in the present.

Though Laura hardly threatens her mother as woman, Amanda knocks her out of potential competition anyway. When Laura’s long anticipated Gentleman Caller (Josh Lucas) finally appears, it is Amanda who entertains him, briefly, sashaying across the room to meet this virile pal of her brother Tom. With marvelous subtlety, Amanda makes a play for him, not quite deliberately competing with her daughter for the man; she just naturally comes on to men since she has no other mode. It works fabulously. Lange slips over the line from courtesy to flirtation unobservably to all including herself. Yes, it’s mother nature. Amanda repeats the motions of conventional courtship, refusing to see them as plainly irrelevant and therefore herself as redundant long since. She flutters around the man. To be absolutely right in this on stage, Ms. Lange probably should be a little fatter and older.

The thing is Ms. Lange has no bad bones in her. Those punitive knife points in the original text that almost get to her throat are not here. The girl is too passive even to wish her mother ill and this Amanda is not vicious enough to deserve ill treatment. She should revel in her power as woman. And the girl is not the victim to be pitied. There’s nothing to pity her for, except her lameness. But when she utters the word "cripple" the Gentleman Caller chastises her for having "an inferiority complex," the strongest moment in the play as played, which leaves ambiguous whether we should agree with him or not. The audience is temporarily stunned. It is trained to respond with unalloyed pity to natural victims.

Tom never discovered that his friend, the Gentleman Caller, is engaged to be married, so the visit is a painful washout for Laura. There’s no man for Laura anyway, as she well enough recognized some time ago, when she secretly copped out on business school as her mother’s idea of a stepping stone to social success. May as well send her to astronaut training, she’s that apt. The psychology of the role is so fine that Laura stirs up a thin silt of hatred for an inferior who never will measure up. Williams makes her crippled, after all, eliciting more than pity for her. Out on the porch when mother and daughter wish on the moon, it is Amanda who responds to the implicit romance of the occasion, while the girl says gamely, though not quite naively, that she wishes for everyone’s happiness. The porch added to the house in this ingenious set together suggest exterior and interior worlds, as does the resulting image of a curtain stretched horizontally to divide the stage into the places of memory at the back and the places of reality at the front.

The actual glass menagerie functions somewhat similarly in both symbolic and actual worlds, though not too much is made of that in the staging. When the Gentleman Caller notices the fragile set of glass animals and accidentally crushes the horn on her glass unicorn, Laura says, "It’s okay, now I’ll be like everyone else." Not a chance. In some ideal production this moment should signify more than it does here. Man admires girl’s unique gift as virginal and breaks it; she joins the race of damaged women. It’s the nearest Laura would come to normal experience. Instead, she just looks mildly ridiculous for this date, dressed in a long, pale blue gown of no style, suiting a gawky, flat chested emotional teenager of twenty four.

The Gentleman Caller says earnestly, "The thing is, you’ll forgive me for saying it, but you’ve got an inferiority complex, see, and that’s no good." (Well, his point seems profound to her.) "You see, I’m pretty analytical about people." Uh huh. The gratuitous pain in the entire business of the Gentleman Caller goes past Tom and the Gentleman Caller himself. The men are physically contrasting types: Tom rather easy going and pleasant; the GC large, physical, and good looking, the former football coach. They all met briefly in high school. He tells her: &#145;I can’t come again tomorrow, or the day after, I’m getting married tomorrow.’ And then, &#145;love is a wonderful thing.’ She looks blank; we gasp.

Tom is a surprise, a bluff, escape artist who sees the ties that will bind him to family forever and so nightly "goes to the movies." Lange is a bit shrill in scolding him for that&#150;they all scream too much&#150;and Tom takes a drunken tumble down the outside stair well, the event standing for a repeating occurrence. Wanting to be reassured that Tom is not like his father, a drunk and a failure, Laura asks him point blank about his drinking, ready to be forgiving. They all are blind and want to be reassured about their moral twenty-twenty, but it is illusory. They are easily, rather painlessly oblivious. He stretches out on the sofa at one point and Laura momentarily lies on top of him. It comes the closest to anything erotically suggestive in the action, apart, that is, from the moment, it’s only a moment, when he straps her leg brace on for her. That contact feels at once perverse and shocking, given the innocence of their memories. The play marks the end of childhood, after all.

In the main, however, the mood is sad, maybe like all memory, and quiet. Lange, consistently evocative, projects a nearly unbearable sadness during a romantic interlude when she dances alone in the darkened house, while Tom, outside on the porch, talks their story.