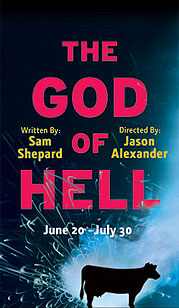 Pluto is the Greek god of the underworld, or Hades; it is also the root of the word plutonium. Plutonium: a chemical element that occurs in trace amounts in nature, but is manufactured in nuclear reactors and is used as fuel therein as well as an explosive in nuclear fission weapons. Hence the derivation of the title, The God of Hell.

Plutonium is nasty stuff that can linger in the environment for &#147;five hundred thousand years .. the most carcinogenic substance known to man …(causing major) mutations in the genes of the reproductive cells,&#148; Greg Haynes (Curtis Armstrong) informs his hosts, the prototypical heartland farm couple, Emma (Sarah Knowlton) and Jack (Bill Fagerbakke).

When Haynes shakes hands with Emma a loud and dramatic bolt of electricity emits from his fingers and races around the room. It happens whenever he touches someone.Emma and Jack are Wisconsin dairy farmers living in the house in which Emma was born.It is a Norman Rockwell kind of picture. The strapping Jack is quintessential Wisconsin dairy farmer &#150; with the perfect accent to match &#150; and devoted to his heifers (a moo is heard offstage whenever the word &#147;heifers&#148; is uttered, funny the first couple of times, silly and distracting later).Emma obsessively waters her plants to stay sane through the long winter months.Her theme might be said to be the loud drips occurring as she progressively drowns the vegetation &#150; also funny the first couple of times, then wearing.Haynes&#146; leitmotif is the dramatic electric display.

Emma and Jack are the couple conservatives want the public to envision when speaking of middle America.Never mind the fact that they are isolated and the only ones in the area to actually farm; it is a labor of love or perhaps of habit.Their neighbors collect subsidies to not farm and stay unsociably behind their seasonably heated or air conditioned doors.

Sam Shepard rushed this play into production shortly before the 2004 election.He wrote it as a satire of the Republican party, the prevarication and outright lying of the current administration, the myth of the Midwestern heartland idyll, the rapidly deteriorating privacy of Americans, crass patriotism, and the cavalier attitude of the administration to the dangers posed by nuclear power and weapons, or to the importance of civil rights and privacy.

Outraged by patriotic hucksterism following 9/11, Shepard crafted a play where the red state, rural idyll is disrupted first by a mysterious guest who is almost a stranger to them; who, in addition to his dramatic displays of electric reactivity, is hiding from some vague and top secret event (think nuclear accident) which has occurred in relation to his vague and top secret job. All of this happened at &#147;Rocky Buttes&#148; (suggestive of real incidents such as the three month long fire at Los Alamos and nuclear accidents which have happened elsewhere in the West).

Also unannounced, intrudes Welch (Bryan Cranston), a smooth talking purveyor of flags, bunting, and other patriotic paraphernalia, the greasy salesman of all time.Cranston slithers to perfection in the part, perhaps most successfully evoking the satiric tone Shepard was striving for.All energy, he alternately flirts with and intimidates the simple Emma, who resists his many intrusive questions such as how many rooms the house has and just who is staying in the basement, all the while stapling flags and bunting over her walls and counters over her protests.

Like the little boy who announced the emperor is wearing no clothes, Emma, the exaggeratedly simple housewife with the unlocked door and instinct for hospitality, resists Welch&#146;s fast talking patriotism and vague allusions to national need permitting this intrusion.Clearly Haynes is his prey, but her sense of fairness and outrage at loss of privacy, pushes her to protect the strange little man with the electrified handshake who is staying in their house. She does not buy Welch&#146;s flags or transparent explanations.She alone sees the danger Welch presents.

Certainly none of the issues in The God of Hell has lost its currency in the intervening two years. If anything, threats to American freedoms seem more numerous and the government less responsive.The graphic portrayal of torture reflects television footage from Abu Ghraib as well as stories about Guantanamo. Personal privacy has continued to be under assault under the flag of patriotism and fighting &#147;the enemy.&#148;

Relevance is not the issue here.Shepard calls this a satire; Jason Alexander in his directing debut announced he would sharpen the humorous tone.But after the first few minutes it is not so funny.The God of Hell, does not approach the level of pointed satire and political humor seen recently in Tim Robbins, Embedded. Both playwrights are mad as hell, but Robbins&#146; story of the Iraq war manages to be funny as well as biting.

Fagerbakke cuts a convincing figure as the overall clad, grown-up farm boy with an aw shucks attitude and limited conversational skill; he loves feeding those heifers and he dislikes answering all his chatty wife&#146;s questions. In the end he is involuntarily conscripted by the fast talking Welch who (on stage) has brainwashed the mysterious Haynes into mindless, lock step submission through torture including massive jolts of electricity to his penis.Fagerbakke and Cranston bring credibility to the drama.

Armstrong is less successful as the erstwhile friend of Frank.His depressed furtiveness evokes a gnome more than a mad scientist who was involved somehow in a plutonium accident; there is no attempt to create a basis by which the farm boy and the fugitive would have been friends.While Fagerbakke&#146;s Midwestern accent flows naturally, Sarah Knowlton&#146;s is so heavy that at times she sounds like an Irish actress unsuccessfully imitating Frances McDormand; very distracting.

The God of Hell, using Pluto as a metaphor, holds one&#146;s attention and successfully evokes feelings of anger and rage from those who come to the theater believing the current administration the most autocratic and vicious in American history.It will not persuade anyone without those beliefs nor will it satisfy anyone looking to be amused.

(17880)
$6.99 (as of January 23, 2021 - More infoProduct prices and availability are accurate as of the date/time indicated and are subject to change. Any price and availability information displayed on [relevant Amazon Site(s), as applicable] at the time of purchase will apply to the purchase of this product.)
related posts