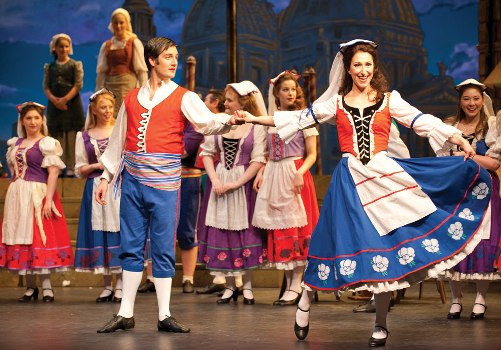 If “The Gondoliers” carries echoes of other Gilbert and Sullivan works — mixed-up babies, thwarted lovers, class distinction and super-haughty aristocrats — consider the source. The great success of works like “The Mikado,” “Pirates of Penzance” and “H.M.S. Pinafore” was partly dependent on the pair’s famed satirical treatment of popular late-Victorian themes such as the foregoing and there is a wise saying, “If it ain’t broke, don’t fix it.” Success, and lasting success, however, is even more linked to great tunes and clever lyrics, and those “Gondoliers” has in abundance. It is one of the brighter stars in the G&S firmament.

The Lamplighters, the stalwart go-to source for Bay Area Savoyards, has sailed in with two weekends of the Venetian comedy (the first from Jan. 20-22 at Yerba Buena Center in San Francisco and the second from Jan. 27-29 at Lesher Center for the Arts in Walnut Creek). And while it is not quite a trip to Venice, it’s a pleasant enough cruise down the canal, beginning with the witty de rigueur pre-curtain announcement about cellphones and finding your nearest exit — in Italian.

The story is your typical silly Gilbert and Sullivan. The infant King of Barataria was smuggled away for his own safety to Venice and placed in the care of a gondolier, who raised him in the family business and then inconveniently died. There was a second son — same age — and the brothers, Marco (Robert Vann) and Giuseppe (Chris Uzelac), grew up to be best friends and, of course, the most eligible bachelors in town. When it is time for them to choose brides, they do it in a game of blind man’s bluff and, by cheating, wed their respective sweethearts, two pert peasant girls, Tessa (Cary Ann Rosko) and Gianetta (Amy Foote).

Well and good until the entrance of the “celebrated, cultivated Duke of Plaza-Toro” (a very funny John Brown), his doting Duchess (Sonia Gariaeff) and their snobbish daughter Casilda (the lovely Elise Marie Kennedy who sings like an angel and is the best thing in the show). Casilda was married, in infancy, to the similarly childish king of Barataria and now her parents, with the aid of the Grand Inquisitor (a very creepy Charles Martin), have come to claim the bridegroom. Trouble is nobody knows which of the two gondoliers he is. Another problem is that Casilda is madly in love with her father’s lowly servant, Luiz (Michael Desnoyers). Got all that? If not, you can just sit back and go with the flow. The second act takes place in Barataria —a vaguely Turkish place — where the brothers have been dispatched to rule jointly until it all has been sorted out. Being of staunch egalitarian principles, they have decided to turn the country into a democracy, which gives Gilbert all sorts of opportunities to poke fun, both at royalty and excessive liberty. The Gilbert and Sullivan shows always have a main theme and this one can be said to be class distinctions (reference “Pinafore”), snobbery (“Mikado”) and of course, true love (all of them), which inevitably triumphs before the curtain falls.

The voices, from the principals to the chorus, are really good — with Kennedy a standout — and, after a rather sluggish overture, conductor Baker Peeples keeps things humming in the pit. Peter Crompton’s set is smashing (complete with moving gondolas) and costumes, by Miriam Lewis in Act One and Jenica Lancey in Act Two, are lavish. So “Dance the Cachuca, Fandango, Bolero” (had to throw that in as it’s my favorite number in the show), “The Gondoliers” is back in town. And, if you care to go along for a ride, rest assured it will be cheaper than a real gondola in Venice, which was going for about $100 an hour, last time I looked.

(9194)
$12.98 (as of January 23, 2021 - More infoProduct prices and availability are accurate as of the date/time indicated and are subject to change. Any price and availability information displayed on [relevant Amazon Site(s), as applicable] at the time of purchase will apply to the purchase of this product.)