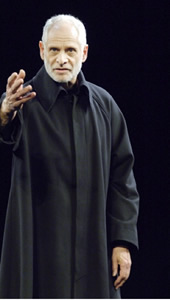 from The Brothers Karamazov by Dostoyevsky

Running in tandem with Théatre des Bouffes du Nord’s production of several short Beckett works under the title Fragments, The Grand Inquisitor is a monologue adapted by Marie-Hélène Estienne from a scene in Dostoyevsky’s The Brothers Karamazov. It is a parable told by Ivan Karamazaov to illustrate the theme of the conflict between Christ and The Church. In it, Christ returns to Seville at the height of the Spanish Inquisition, raising a child from the dead. The High Inquisitor comes out of the Cathedral and arrests him, telling him that by tomorrow, at his order, Christ will burn with the heretics, and this in full knowledge and recognition the he is who he is.

The inquisitor questions Christ, or rather lectures him, expounding on how the spiritual truths of the three temptations were such an apt lesson for humanity and how, essentially, Christ is no longer needed. The Inquisitor explains how The Church has taken up his mantle and, paradoxically, done what he refused, taking possession of all the Kingdoms of the earth in order to bring about human unity. The work is underway, he says, and Christ should not be here to ‘disturb’ it.

There are two actors on stage. One is Joachim Zuber, playing the mute Christ; sitting, listening, watching. The other is Bruce Myers, long time collaborator of the play’s director, Peter Brook. He plays narrator by turning his head to the audience and plays the eponymous Inquisitor when speaking directly to Zuber. There are only two props, stools for the actors to sit on. The lighting is by Philippe Vialatte, which mainly concentrates on a fairly small amount of space front and centre of the large, undecorated stage.

The production is very simple and direct. It is a straightforward theological and political piece, spoken directly in monologue, nicely performed but without dramatic context. Whatever role the parable plays in the novel as an exemplar of theme and as a point of characterisation, here it exists standing alone, a piece of philosophy to be contemplated in relation to the wider world in which it is now received. That world is very different from the one Dostoyevsky beheld, but the questions are still very apt. What role does freedom of choice (or political freedom) now play in the world and where is God when the State is the new Church, even in America?

It is a thoughtful piece of writing, calmly and carefully presented by Myers, and minute for minute it gives any thinking human being plenty to ponder on the long walk back to the car. But I did find myself wondering about it as a presentation in the context of a theatre festival where ticket prices put your time spent at about 50 cent per minute, and I wonder if the natural home of this kind of presentation is not something more proletarian. Theatre of this calculated clarity, simplicity and modest cost should be able to reach out to a larger audience, perhaps bring the light of thought beyond the confines of the high price theatrical spectacle. Lighting costs money, of course, but you wonder if this play was carried out in an open space free to the public, would it touch more hearts and minds? Brook is a legendary name in theatre, but should it remain known only to those with the means to fork over a large chunk of cash for a 50 minute monologue in a cosy theatre? I wonder.