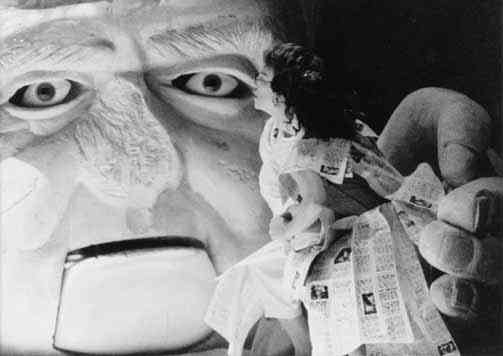 A prophecy: If you jump on The Green Bird and try to ride it with your everyday prosaic intellect, it may throw you off. But, if you sit back and let it fly along on its own terms, it will lift you and carry you as lightly as a feather on its wing.

Carlo Gozzi&#146;s 18th century fairy tale is full of such prophecies, although the one above is the reviewer&#146;s own. It also is full of illusion, foolery and enough special effects to satisfy the most Star Wars-hardened theatergoer.

The prolific Venetian playwright (The Love of Three Oranges, Turandot, The King Stag) is enjoying a renaissance in our time. But the edition of The Green Bird currently playing at Berkeley Repertory Theatre is not the one Julie Taymor staged on Broadway earlier this year. A collaboration with the Minneapolis-based Theatre de la Jeune Lune, it is its own mixture of Kabuki and commedia dell&#146;arte, spiced up with contemporary references and slang. (Berkeley theatergoers will have a chance to experience the Taymor take on Gozzi when The King Stag comes to Zellerbach Hall under the aegis of Cal Performances in March of next year).

The Green Bird is a merry little tale with a moral or two. Greed has its price; be careful of what you ask for (you just might get it) and, of course, love conquers all. In the telling there’s a genuine Talking Head (Robert Ernst), the life-sized bird of the title (a graceful Michael Edo Keane) who really is an enchanted prince, a giant snake that would do credit to a Wagner opera, a power-hungry poet, and a very wicked queen (Brian Baumgartner in glorious drag).

Then there are the twins, supposedly murdered at birth by their jealous grandmother but secretly saved and raised by a lowly sausage-stuffer and his wife. Representing reality and wonderfully played by Sarah Agnew and the always-reliable Geoff Hoyle, the latter pair is the best of the bunch. Though the twins, the prissy Renzo (Stephen Cartmell) and Barbarina (Stacy Ross) do their bit to liven up the proceedings. Ross, especially, is a riot as she trades the pursuit of wisdom for the pursuit of riches, swapping her rags for a snakeskin bikini ("Donatella, eat your heart out!") and calling plaintively for a latte when the going gets rough.

Once they set out on their quest for fame, fortune, love and their real mom and dad, the twins reject their foster parents, then hire them back again as servants. Thank goodness, because when the plot bogs down, you can always count on Agnew and Hoyle to lift it up again.

Most of the bogging happens at the hands of Dominique Serrand, who plays the poet, a court toady who would do almost anything to further his goals. This is a little strange because Serrand is both the director of The Green Bird and the designer of its wonderfully imaginative scenery. Perhaps he should have left the acting to someone else and concentrated his prodigious talents where they really count.

His set design, a giant sandbox behind which are metal sliding panels which open and close on vistas of palaces and living statues, is a marvel, beautifully matched by Marcus Dillard&#146;s dramatic lighting and the lush, witty costumes of Sonya Berlovitz. Composer Eric Jensen, seated above all the action, provides appropriate &#150; mostly percussive &#150; musical accompaniment.

The Green Bird seems over-long at two-and-a-half hours. Some of the comic shtick (but not Hoyle&#146;s please) might be cut to advantage.

This magical fantasy would be ideal for children, were it not for the four-letter words, bare body parts and sexual references that crop up from time to time. Although a legitimate part of the commedia tradition, the bawdiness often seems gratuitous – although one matchless line uttered by a former statue right near the end is worth waiting for. As it is, you&#146;d better leave the kids at home. This is something of an "R" rated show.

Oh well. We grownups could use a little magic in our lives once in a while and a healthy dose of it flies in on the wings of The Green Bird.

(41063)
$9.98 (as of January 25, 2021 - More infoProduct prices and availability are accurate as of the date/time indicated and are subject to change. Any price and availability information displayed on [relevant Amazon Site(s), as applicable] at the time of purchase will apply to the purchase of this product.)

(9730)
$2.84 (as of January 25, 2021 - More infoProduct prices and availability are accurate as of the date/time indicated and are subject to change. Any price and availability information displayed on [relevant Amazon Site(s), as applicable] at the time of purchase will apply to the purchase of this product.)

(9807)
$19.99 (as of January 25, 2021 - More infoProduct prices and availability are accurate as of the date/time indicated and are subject to change. Any price and availability information displayed on [relevant Amazon Site(s), as applicable] at the time of purchase will apply to the purchase of this product.)
related posts