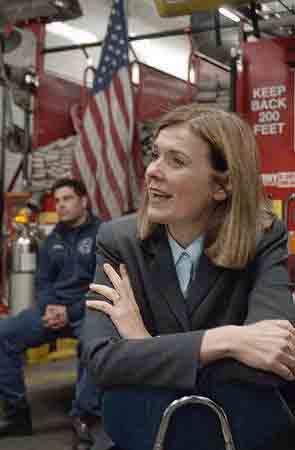 Let&#146;s hear it for The Guys. The guys in this case are firefighters, not a group often thought about before 9/11 (unless your house was burning down), now at the top of our national honor roll. Anne Nelson&#146;s play is an homage to all of those who died in the Twin Towers on that fateful day almost two years ago.

Well, not really a play. Culled from Nelson&#146;s own experience in writing eulogies for some of the fallen firefighters, it was conceived as a staged reading. The actors have open scripts before them (to which they do not always refer) and the whole thing has a kind of artless impromptu feel. This is all to the good because what the audience is doing is listening in on a conversation between two very different people, each trying to sort out their feelings about a disaster that is too big for their minds to hold.

One is Nick, a NYFD captain who just happened to be off duty when his unit was called into the World Trade Center and disappeared from the face of the earth. Still unable to come to terms with that, he has been asked to speak at several of the memorial services. He is at a loss for words. The other is Joan (a nom de plume for playwright Nelson), an Oklahoma-born reporter who, like many of us, feels powerless despite an overwhelming desire to help. Somehow, in the peculiar serendipity of those days, they are thrown together and find a kind of catharsis, the beginning of healing. As do those who witness their encounter.

The lead actors of The Guys change every few weeks. The Berkeley opening featured Sharon Lawrence (NYPD Blue) and film, stage and television actor Keith David. Upcoming weeks will see Lorraine Toussaint, Dan Lauria, Joe Spano, Linda Purl, Wanda de Jesus and Jimmy Smits in the roles. Written for the Flea Theater in New York, a venue near Ground Zero, it opened an amazing 12 weeks after the event with Sigourney Weaver and Bill Murray. Other New York and Hollywood stars stepped up to the plate over time, including Tim Robbins and Helen Hunt who did it in Los Angeles.

Star power aside, the event itself is at the heart of The Guys, the real stars being those you never see, the four men for whom Joan crafts eulogies, based on Nick&#146;s rambling recollections. It begins silently, with Alexander V. Nichols&#146; stunning projection design on a giant vertical screen in back. The mood is set as the all-too-familiar images unreel, the giant buildings on the horizon, a plane, fire, smoke, the faces of people staring in stunned disbelief.

David, quite awkward at first, seems to grow into the fire captain&#146;s boots as he tells his tales. At the end, when he delivers the last eulogy in full regalia he is the essence of dignity. Lawrence, on the other hand, is incandescent, almost from the start. Blonde and slight, she is a direct physical contrast to David&#146;s dark solidity. She is vulnerable, prone to tears, but strong in her determination to pull the fireman through his ordeal. Together they do it, with his recollections and her words, but it&#146;s not an easy ride.

Neither is it all gloom and doom. Nelson uses comic relief deftly to break the tension at several points. Joan describes a wedding she recently attended "like an intermission in all this." They dance an imaginary tango together. They laugh at some of the stories he tells and so does the audience. One of the lost firefighters, Barney, was always getting into trouble. Another, Patrick, the captain&#146;s best friend, was an astute critic of the firehouse&#146;s frankly lousy cuisine.

Then there is Bill; "just an ordinary guy, a schmo…but you can&#146;t say that in a eulogy." And Jimmy, the new guy, still on probation. Nick met him only once, on his first day, and can&#146;t even remember what he looked like. Gradually, they emerge as individuals, one by one. And we feel the pain all over again. Because, as The Diary of Anne Frank demonstrated decades ago, the only way to truly understand an enormous tragedy is to break it down into its individual components, the people who were involved.

Under close critical scrutiny The Guys may not qualify as a great play, but it is an unforgettable night in the theater.