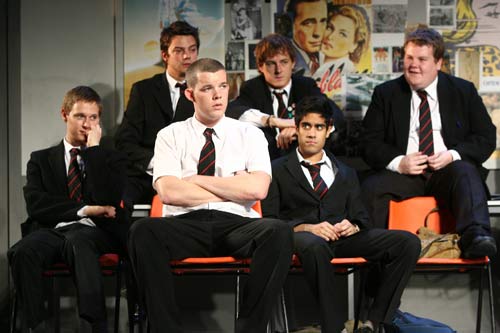 The conflict which energizes Alan Bennett’s engrossingplay, The History Boys, is between two teachers at an English high school. The eight "history boys" are all finalists seeking entry to Oxford or Cambridge, the universities of the elite. Hector (Richard Griffiths in a Tony award nominated performance) deplores the entire process, damning examinations as the enemy of education. For him, education is providing his students the broadest possible exposure to history and literature, giving them the tools to think independently, to value ideas and the life of the mind.

But the thoroughly disagreeable headmaster (Clive Merrison) has hired a younger teacher, Irwin (Stephen Campbell Moore) to coach the boys in a manner directly aimed at success in the entry exams. What is necessary, he contends, is to take a contrarian point of view, whether believed in or not, and make a case for it. It matters not whether there is any genuine validity to the thesis; it’s the quirky, presumably original thinking that will appeal to the examiners, that will distinguish the applicant from the crowd.

The boys themselves constitute a Greek chorus, raising questions and issues with both teachers. They know and like Hector, but they are also ambitious and open to the presumed advantage that Irwin can provide. Some of the boys become individualized, fully developed characters, in particular Posner (Samuel Barnett), who is coping with his homosexual attraction to Dakin (Dominic Cooper), and also happens to be Jewish. (There’s also a token black and a Muslim in the group, but little point is made of their identities.)

Homosexuality is a major subtext for the play, involving the key characters in a manner that is also revelatory of the choices that they make in their lives and putting the more academic arguments of teaching technique into ironic focus. In addition, Posner’s Jewish background provides entry to discussion of the Holocaust, just one piece of the history viewed so differently by Hector and Irwin. Frances de la Tour plays the sole female teacher, allowing for a distaff point of view to be introduced with appealing humor. More than once, the point is made of the element of sheer chance, the utter randomness in the turns of history. And to one less than inspired student, history is no more than "one fucking thing after another."

Indeed, a subject that in lesser hands might have been deadly dull, here is filled with thoughtful commentary integrated seamlessly into a naturalistic presentation. Humor abounds, from a French class in which the boys act out a scene in a brothel to a reenactment of a scene from Brief Encounter. An onstage piano provides background for occasional interludes of song, more often than not endearingly sung by Posner. There are also frequent literary and historical allusions for which American audiences generally willbe less prepared (Thomas Hardy’s Drummer Hodge, for example), but that shouldn’t get in the way of a thorough engagement with this work of literate and profound intelligence.

Scenes alternate between classroom, headmaster’s office, and other school locations, smooth transition provided by sliding panels while film of the characters in the school environment are projected on a rear screen, as well as the aforementioned occasional song. Nicholas Hytner’s impeccable direction keeps the multiple themes in clear focus, while sacrificing neither the plentiful humor not the richness of the characterizations.