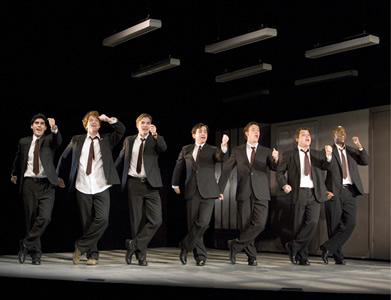 Ah, how nice it would have been to have seen The History Boys, fresh, on a stage, without first having seen the movie and heard the years of buzz about the play. Still, History Boys at the Ahmanson manages to charm and engage the brain. How often in our adult lives do we hear Auden spouted off, parts of speech actually labeled and played with, and strings of phrases that are so polished and well turned.? There is something delightfully anachronistic about Bennett’s poke at pedagogy and celebration of witty sophomoric youth. It is also a reminder of how much of what we learn in school is lost later on; how what is important is learning to learn, often a scarce commodity in the world of formal education. But all is not well in academic heaven.

In case the movie and the hoopla slipped by you, the boys are British youths from the wrong side of the tracks who have, through academic prowess egged on by an idiosyncratic teacher, won the right to compete for entrance to Oxford or Cambridge. They are an irreverent lot. They horse around, mocking their English teacher, Hector (Dakin Matthews), whose style is to embrace drama from Shakespeare to classic film, throwing back at him outrageous quotes and mockery. But he has engaged them and if it weren’t for the happenstance of the headmaster’s wife having been in an unusual place at an unusual time and looking in just the right direction, History Boys would be another coming of age tale of boisterous youth and identity crisis. And in case the movie and the hoopla have escaped you, I will not say exactly who does what to whom. In a stew of adolescent existential angst, raging hormones, and self questioning of sexual identity you can probably fill in most of the blanks.

The production is a faithful recreation of the original British staging. The background videos which, in double time, give a flavor of the boys outside of the classroom, have been re-shot using the cast of the traveling company for consistency. It is a production seemingly designed for a more intimate theater than the Ahmanson and I doubt that anyone in the back of the orchestra or in the balconies could get the nuances despite the fact that the actors were miked.

Everyone involved is aware that, as well as the boys have done, they are in a second rate school in a second rate town. The stuffy headmaster (H. Richard Greene) is aching to have the glory of the boys’ success shine on him and his school – for which one can be sure he will take the credit. The only female teacher, Mrs. Lintott (Charlotte Cornwell), is in a second rate position by virtue of her gender.

The new teacher, Irwin (Peter Paige), barely out of school himself, whose sole goal is to give the boys an angle, a strategy for interviews and test taking struggles himself with many of the issues the boys have. Hector is the only one not focused on the holy grail. He keeps the boys irreverently enthralled with his rapture for learning — learning anything, but learning to learn — and his mock discipline. If it weren’t for one little thing he would be the perfect teacher, the one you remember long after you have forgotten the particulars of what you have learned. There is just that one little thing that will not be ignored, nor should it be.

This is not an exciting production, but it is a competent one. Matthews carries out the role of the motivating teacher who soars above the curriculum with charm, wit, and impeccable timing. It is the classroom we all would like to have been in. Two of the boys are outstanding. Seth Numrich could hardly be out done as the gorgeous guy who just happens to know it all and who uses his allure to get pretty much what he wants from whom he wants and when he wants. And Alex Brightman palpably struggles with being the youngest, shortest, fussiest and only Jewish student: torn between praying that he is not gay and his pure infatuation with Dakin, the gorgeous guy. It is delightful when Brightman croons and bursts into vampy old songs with fellow student, Brett Ryback at the piano.

If you have not seen the movie, or the original British or Broadway productions, History Boys is a must. If you have, this production is not compelling but it is entertaining. A good place to revisit but perhaps not worth a detour.