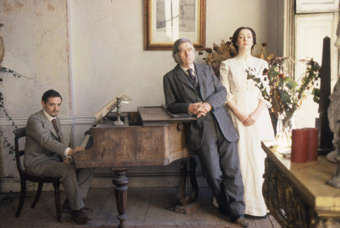 Though Dancing at Lughnasa, Translations and Aristocrats have all enjoyed recent revivals, The Home Place is Brian Friel&#146;s first new Irish play since the turn of the century. Friel has been spending most of his time adapting Chekov in productions like Uncle Vanya, The Yalta Game, and Two Plays After. Now, finally, even the title of his latest work comes laden with meaning and even irony as he returns "home."

The Home Place is another in Friel&#146;s cycle of historical tragedies depicting the British plantation of Ireland as a chronic misreading of the land and its people. In Translations the controlling metaphor was mapmaking and placenaming; in Aristocrats it was historical biography. In The Home Place, 19th century eugenic theories are the means through which the English seek to measure the Irish, and once again the incongruence of cultures is underlined by the failure of the measuring system to account for the true nature of its subject.

The action takes place in Ballybeg, Co. Donegal, in 1878, sandwiched in an historical timeline between Translations and Aristocrats. Christopher Gore (Tom Courtenay) is a well-meaning English landlord whose cousin Richard (Nick Dunning) has come with the intention of pursuing a scientific inquiry. Inspired by Darwinism, and more particularly Sir Francis Galton&#146;s spin-off theories of human racial classification, Dr. Core intends to survey the anthropometry of the indigenous Irish. By measuring their craniums and other skeletal characteristics, he hopes to crack the genetic code of the indigenes, demonstrating their (inferior) place in the natural order and scientifically predicting their (potentially dangerous) behavior. Christopher sees his cousin&#146;s arrogant presumption as a bit of harmless English eccentricity, but not so some of the locals, including paramilitaries lurking in the woods around the Gore estate.

The play&#146;s most heart-rending scene takes place when Richard, assisted by the taciturn and bowler-hatted Perkins (Pat Kinevane) surveys a small child while Christopher makes game attempts to put her at ease with encouraging compliments. Neither man really understands the abject derogation inherent in the enterprise–one because he doesn&#146;t care and one because he simply doesn&#146;t know the difference. The folly of it is doubly underlined partly by the audience&#146;s historical distance from the methodology (and, as the program reminds us, the fact that such eugenic theories reached their nadir in Nazi Germany), but also in the brief appearance of Clement O&#146;Donnell, the drunken and bedraggled father of Christopher&#146;s housekeeper Margaret (Derbhle Crotty). O&#146;Donnell is master of a local choir, and he points out that songsmith Thomas Moore was closer to finding the measure of the Irish soul than any scientific test could ever be, an observation met with derisive laughter by the uncomprehending Richard.

This is a play rich in detail and contextual allusion. There are some excellent passages of dialogue, and though many elements are perhaps overly familiar, the prevailing tone of sadness which director Adrian Noble sustains throughout is affecting. It is a contemplative piece, concentrating less on the slow burn of suspense provided by the underlying historical narrative of the Land War (it begins with Christopher off-stage at the funeral of a local landlord murdered by revolutionaries) and more on the internal dialogue with the planters&#146; sense of self in this place which is never "home." Christopher fears death, but on another level he realizes the futility of life itself, of the life his "home" country created for his family long ago and which he has inherited replete with a legacy of shame and displacement.

Tom Courtenay&#146;s beautifully realized performance captures the many dimensions of the landlord both as character and as symbol. His delicate vocal characterization invites sympathy, but his bursts of fear and desperation demonstrate the tensions that underscore this colonial society. Nick Dunning (The Homecoming) gets good mileage from his usual range of disdainful anglophone physical and vocal cues, but McGovern virtually steals the show during his brief appearance, mixing dignity and degradation in a significant and meaningful manner. Derbhle Crotty (Sive) is a quietly significant presence as the housekeeper secretly loved by her master and less secretly so by his son David (Hugh O&#146;Connor). With a fully due sense of historical irony, her character draws together many of the threads of drama, metaphor, and social analysis in the play, although hers is a secondary role in terms of action.