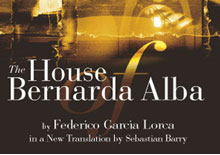 Spain, 1936: a country on the cusp of a civil war in which the forces of political conservatism and social repression will eventually overwhelm the aspirations of more liberal minded reformists. In this charged atmosphere 38 year old poet and playwright Federico Garc�a Lorca presents the manuscript of the third of his &#145;peasant trilogy&#146;, following Blood Wedding and Yerma . It is the story of a family of women, a house of women in fact, enclosed in a world where men are a destructive external force. The father of the house has just died. His widow, Bernarda Alba, is determined to maintain control of her daughters and to stand aloof from the peasants, servants and beggars who reside outside her walls.

Yet passions boil under the oppressive heat of the Andalusian sun. As an unseen suitor courts the eldest daughter, who has just inherited the bulk of the family fortune, desire and jealousy threaten to bring down the House of Bernarda Alba as surely as the melancholic paranoia of Roderick Usher destroyed his. Unfortunately for Lorca, his political conscience, his social standing and even his sexuality became among the causes of his death at the hands of fascist thugs, who murdered him later that same year.

It is difficult to avoid a political reading of Lorca&#146;s play, and it is also difficult to criticize it without being accused of insensitivity to history. The Abbey Theatre&#146;s production is based upon a new translation by Sebastian Barry (Hinterland) which does not alter the text in its essential details, but reflects the speech patterns of colloquial hiberno-English. Director Martin Drury and set designer Francis O&#146;Connor have evidently striven to create a physical space which represents psychological unease. With its towering, Escher-like interior clearly representing the distorted mind of its central Matriarch, and coming to a climax with the symbolic shattering of the old woman&#146;s cane by her rebellious youngest daughter, there is an explicit relationship between the political and the personal which not only invites but demands an acknowledgement of its importance.

Lorca wrote to friends with satisfaction that he had stripped his text of all unnecessary "poetry", a peculiar sentiment from a renowned wordsmith. Whatever the richness of the original, Barry&#146;s translation is flat and colorless. The addition of hiberno-English phraseology taken into account, there is little that is linguistically resonant in the speeches made by each of these characters, and their interactions frequently seem like the contrived pedantry of an ideologue. It is difficult to believe in these characters as human beings, and even more difficult to accept them as a family. The situation is not helped by a directorial insistence upon allowing each of the cast to play their part with their own accent.

There is a fundamental disconnection among this group of people which has less to do with familial dysfunction than it does with a production which seems fundamentally at odds with itself. In trying to appeal to the naturalistic as well as surrealistic elements, Drury has not been able to find a middle ground which successfully navigates a space for his and Barry&#146;s &#145;translation&#146; of the original text. The wildly varying accents contribute to a sense of openness in this nominally enclosed environment which makes a nonsense of its socio-geographical specificity. Though the script constantly demands the audience accept its assertion of repression at face value, the production has not succeeded in representing any such thing. The stage has no fewer than eight entrances and exits, and there is almost constant movement in and out of them. This seems too busy and free a household for a maternal prison which seeks, paradoxically, to protect a dynasty by destroying its capacity to continue.

The character of Bernarda Alba herself is also of questionable veracity. In collapsing the dilemma as a well-to-do widow with five daughters into an allegory of Spanish Patriarchialism, there is a gender confusion at the center of the story. This is not helped by the production&#146;s reliance on a severe, sexless characterization by Rosaleen Linehan (Gates of Gold). In contrast with, for example, John B. Keane&#146;s Big Maggie, there is no real sense that Bernarda was ever a wife and mother. Her treatment of her children thus never ascends to tragedy, and is also drained of social context. The sub-plots and subsidiary characterizations are left equally stranded between an allegory and a polemic of questionable applicability to a contemporary Irish audience.

As you would expect from the National Theatre, the production is handsomely mounted and there are some strong performers on the stage. Unfortunately, none of them is given the opportunity to really shine, as the loose direction does not challenge these actors to produce disciplined performances which cohere with the themes of the play. Though briskly paced and generally well intentioned The House of Bernarda Alba never seems to exert quite as much power as it promises to, and what may have been a cornucopia of social, political, and psychological subtlety in another incarnation here seems a disappointing muddle.