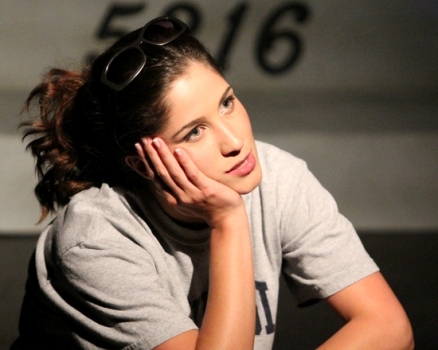 Ironically, this disappointing musical about the short-lived marriage of Jamie Wellerstein and Cathy Hiattpivots about an intriguing premise: he looks at it from its ecstatic beginning five years ago to its sorrowful end today while she sees it through the rear-view mirror of its dismal conclusion back to its oh-so-promising start.

Jamie [Rory Alexander; no relation to this reviewer]and Cathy[Ashley Cuellar] take alternating, solo turns on the sparse set for the first seven songs that supposedly describe their characters’ ascending and descending arcs. Cathy’s is at least discernible but Jamie’s is not, largely because two of his first three songs are more schtick [“Shiksa Goddess” and “The Schmuel Song”] than substance about the emotions this lovely young woman stirs in him, a resonance that his many former Jewish girlfriends failed to induce.

But trying to figure out their inversetrajectories in these songs and where they intersect feels like that algebra problem of two trains moving in opposite directions at different speeds: where and when do they meet?Turns out the crossover comes in the eighth and ninth songs where both appear onstage together for the first time, in a duet, he now from stage left, she from stage right, opposite from their initial entrances. It’s a clever bit of staging but not sufficient to flesh out the characters of a young writer [Jamie] whose first novel is a whopping success and an actor [Cathy] who has yet to gain traction in the theater but persists, ever-hopeful, and perhaps always destined to be so.

“Five Years” has been banging around theaters for almost ten years by now and its structure—an interlocking chain of songs—quickly wears thin. Still another problem is Jason Robert Brown‘s music and lyrics, and Ron Snyder’s instruction of the two actors. Brown’s songs lack any melodic distinction and, aside from a few witty one-liners, the lyrics are pedestrian.Both Alexander and Cuellar have pleasant voices but Snyder has them belting out each song as if they’re auditioning for “American Idol” or, worse, an Andrew Lloyd Weber show.

Where some wistful phrasing (think Bernadette Peters’ version of “Send In The Clowns”) would underscore Cathy’s heartache in her opening song, “Still Hurting,” Cuellar’s voice simply sinks to the barely audible. She confines herself to a limited vocal range and volume, with little shading; whether that’s the best she can do or she’s simply following Musical Director Snyder’s dictates, who knows? Alexander has a slightly better, more nuanced voice but, like his partner, he’s not given much to work with.

Oddly enough, both Cuellar and Alexander seem rather capable actors. At those few and far-between instances where each is called upon to express doubt, delight, regret, rebuke, happiness or unhappiness, they do so deftly with a shoulder shrug, the wave of a hand, the nod of a head—but then it’s that’s-enough-of-that and it’s time for another so-so song. Too bad these attractive young performers aren’t given more time to develop their characters and give their fictional marriage a shot at more than just five years.

The musicians are Nancy Kuo on violin, Yuichiro Kevin Asami on guitar, Jay Rubottom on bass and Ron Snyder on keyboard.