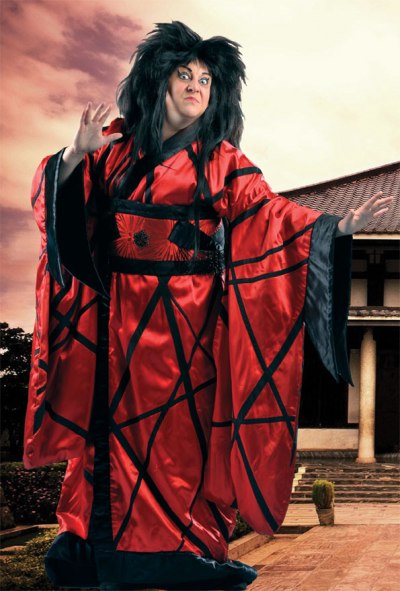 Sonia Gariaeff as Katisha in “The Mikado”
Photo by David Allen

Something’s really rotten in the town of Titipu. Actually, a whole lot of things. People can be beheaded for flirting; all the official posts are held by one (extremely corrupt) man and the course of true love never ran so bumpy. Yup, it’s “The Mikado,” arguably Gilbert & Sullivan’s masterpiece, back on the boards again, this time in a curiously lackluster performance by The Lamplighters, the venerable San Francisco Bay Area G&S troupe. It will be performed on successive weekends in Walnut Creek, Napa, Mountain View, San Francisco and Livermore through Aug. 26— and we hope will get better as it goes along.

There are some very good features in this production. Ric Tringali’s set is a stunning thing of gilded pagodas, gates and benches, backed by a fanciful painting of sea and mountains and sky. Beaver Bauer’s costumes are opulent and the music, here conducted by Monroe Kanouse, always is great. But performances are uneven and the whole thing never really comes alive until the end of the first act. With the entrance of the female heavy, Katisha, “a most unattractive old thing, tra-la,” who has her eye on and her hooks into the hero, comes an energy that enlivens the whole show. Sonia Gariaeff is absolutely riveting as the wild-haired virago who will stop at nothing to get her man, her gorgeous voice and commanding presence chewing up everything and everybody else on the stage.

The two romantic leads — the innocent but wily Yum-Yum (Lindsay Thompson Roush, alternating in the role with Moira McManus) and Nanki Poo (Robert Vann, sharing the part with Michael Desnoyers), the son of Japan’s ruler, traveling in the disguise of a wandering minstrel in order to escape the clutches of Katisha— are young, attractive and their voices blend well. But Vann’s voice is uneven and, in solo, barely carries past the fifth row (a case for onstage miking, odious as that may be). Roush is better, a sure soprano with a sense of humor that comes out in her self-centered aria “The Sun and I”. Also excellent is Molly Mahoney as her girlfriend Pitti-Sing. Pooh-Bah, the Lord High Everything referred to in Paragraph One, is done both comic and vocal justice by Robby Stafford, but his sidekick Pish-Tush, a noble lord played by John Melis, just sort of stands around when he isn’t singing (which he does very well). The exact opposite is true of William H. Neil as the bloodthirsty titular character who comes on in the second act to (eventually) set everything right. Neil’s voice is not great, but he has a wonderfully wicked laugh and pretty good comic acting chops.

But, of course, the star of any “Mikado” is Ko-Ko, The Lord High Executioner who can’t bring himself to do his job, thereby endangering the entire town and engineering the plot that saves both the lovers and his own neck. F. Lawrence Ewing has an interesting take on the character, playing him as both inept and effete. And he does it proud, once you get used to his twist on the role.

The chorus of Japanese townsfolk and ladies sings well but the movement is pretty static in the time-honored Savoy tradition of one-step-to-the-left-one-step-to-the-right, punctuated with much flapping and fluttering of fans. Director Jane Erwin Hammett keeps the plot moving briskly but not her actors. There is a nice updating of Ko-Ko’s “I’ve Got a Little List,” in which he plans someday to execute everybody from Lady GaGa to corporate CEOs, texting motorists and Sarah Palin, accompanied by clever videos, running across the supertitle screen.

But there is very little “wow factor” in this “Mikado” except for Gariaeff’s Katisha, who is not onstage enough but, when she is, manages to make up for much that is lacking.

(20131)
$5.96 (as of January 21, 2021 - More infoProduct prices and availability are accurate as of the date/time indicated and are subject to change. Any price and availability information displayed on [relevant Amazon Site(s), as applicable] at the time of purchase will apply to the purchase of this product.)
related posts