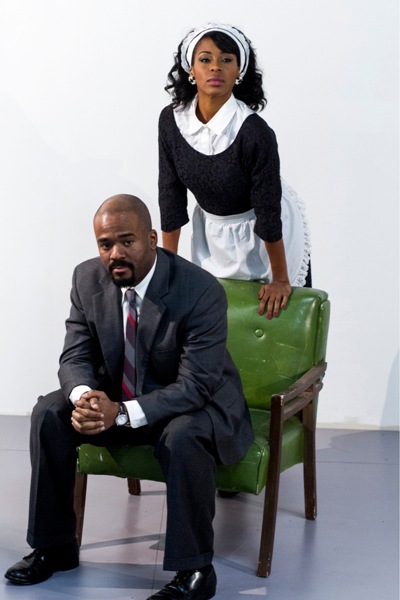 “The Mountaintop” takes audiences on a riveting and reflective ride in a fantasy-tinged imagining of the last night in the life of civil rights leader Martin Luther King, Jr.

It’s April 3, 1968, and King (Larry Bates) is in a Spartan room of Memphis’ Lorraine Motel. The story opens literally with a bang as a lightning storm sends sheets of rain, the color of blood, spilling ominously down window panes.

Playwright Katori Hall jettisons our romanticized visions of King, portraying him instead as an all-too human being trying to hold it all together under the heavy yoke of destiny and death threats. King is tired, hoarse, and most vexing of all, this chain smoker is out of cigarettes. Earlier that day, he delivered his “I’ve Been to the Mountaintop” speech which appeared to foretell of his imminent demise. The hour is late, but King is compelled to work on yet another speech. He kicks off his shoes and reacts to the disagreeable odor. So much for the life of an icon.

Room service is called and coffee delivered by a fetching maid named Camae (Danielle Moné Truitt), who lingers to chat, proffer cigarettes, and fortify King’s java with whiskey from a flask. Yep, Camae has just what King needs and flirting begins. Chit-chat turns to a wide-ranging discussion that is both political and personal. Thunder continues to rumble. Both Bates and Truitt are fine actors with the needed chemistry to make them highly believable in their roles and equal to the demands of this 90-minute, two-person drama.

Director Roger Guenveur Smith wisely lets Bates use his natural voice and not sink into a forced impersonation of Dr. King’s distinctive cadence. This point is brought home when Camae assumes King’s oratory style to deliver an impromptu speech on race relations. It’s one hell of a speech that starts playfully but ends with “Fuck the white man! I say, fuck ‘em!”

At that point, the play takes a metaphysical turn and we learn Camae is full of surprises. Such as, she’s an angel in disguise sent to ease King’s transition to the hereafter. He glimpses his fate as the black-and-white TV suddenly turns on displaying news footage of Coretta Scott King in widow’s weeds, followed by Robert F. Kennedy delivering the shattering news of King’s death to a crowd of civil rights supporters. It’s all the more chilling for those of us in the audience who lived through Kennedy’s own assassination just two months later.

It’s no surprise that 39-year-old King isn’t ready to leave this life just yet. When he gets nowhere trying to bargain for time, he asks to speak with Camae’s “supervisor.”Camae nonchalantly dials the room’s rotary telephone (who knew that heaven’s phone number has at least 15 digits) and hands over the receiver. Listening to the one-sided conversation, we learn that God is a black woman and not one to be trifled with. Suddenly, all that thunder makes a whole lot of sense.

King ultimately acquiesces to his fate after witnessing a dizzyingly fast montage of images, set to music, depicting both the cost and rewards of social progress in future decades. Sound/projection designer Marc Anthony Thompson achieved the effect by employing the technique known as kinestasis; first introduced to television audiences in 1968 on the Smothers Brothers Comedy Hour, a show known for its commentary on social issues. Nice touch!