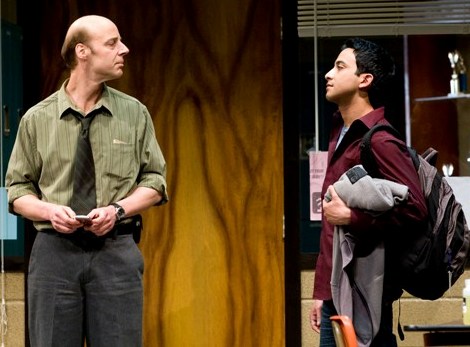 Rajiv Joseph just missed out on a 2010 Pulitzer Prize for his “Bengal Tiger at the Baghdad Zoo” opening this week on Broadway and starring Robin Williams as the beast of the title. Oh well, maybe he’ll get it for “The North Pool.” The 36-year-old Ohio-born playwright, who is known for his edgy dramas, has already made some ripples on the theatrical waters with “Gruesome Playground Injuries” and “Bengal Tiger.” A dip in “The North Pool,” which first appeared in the 2009 TheatreWorks New Works Festival, should seal his reputation as one of this country’s most exciting young writers. Giovanna Sardelli, who directed the play in development, has done a fantastic job with her actors (also from the original cast). “North Pool” is a two-character, 90-minute thrill ride.

Things begin simply enough. A new student, a Saudi Arabian transfer from a ritzy private academy, is called into the vice-principal’s office, presumably for cutting class. But, as the older man notes, people are like onions and, once you start peeling the layers away, who knows what you will find? Khadim, the kid (Adam Poss) has a bit of a chip on his shoulder. He thinks he is being “racially profiled.” Poss gets the tone of nervous disdain just right. Dr. Danielson (Remi Sandri) has a few issues of his own. He starts out as a bit of a bully, while repeatedly insisting “I’m not trying to be a tough guy here.” And the tougher he gets, the more you dislike him. But just wait, he has some layers to peel away as well.

Joseph has a way of pulling rugs out from under you, shifting the scales when you least expect and, after a while, Khadim is not looking so good and Danielson is getting a bit more of our sympathy. And it will go back and forth like that. Their confrontation takes place in real time and, by the time it is over, the playwright has touched on themes of war, commerce, teenage bullying, sex (a lot of sex), vandalism, adult responsibility, suicide, academic politics, racial politics, cruelty to animals and the ongoing popularity contest that is high school.

To disclose any more would ruin the fun and—in spite of the aforementioned themes—there is a lot of fun in this play, as well as excitement and horror and some tenderness at the end. Joseph gets the tone and the vocabulary right for both characters, and the actors couldn’t be better in their roles of passionate adult authoritarian and diffident entitled kid.

It took me an hour each way to get to the Lucie Stern Theatre in Palo Alto to see this show, actually longer than the running time of the play. I don’t regret a single mile.