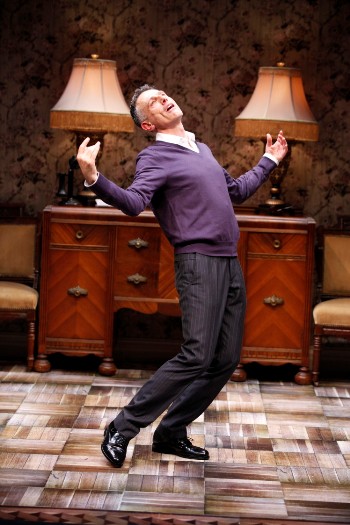 David Greenspan in “The Patsy”
Photo by Carol Rosegg

By Barry Connors (“The Patsy”) and David Greenspan (“Jonas”)
Directed by Jack Cummings III
The Transport Group at the Duke on 42nd Street, New York
Through Aug. 13, 2011

Being a walking encyclopedia of theater doesn’t sound especially appetizing, does it? It suggests either scholarly pedantry or preening diva-tude, both of which get old quickly. But David Greenspan manages to make it look effortless, entertaining, and engrossing all at the same time. How does he do it???

In recent years, Greenspan has performed solos that illuminated the theatrical philosophies of Aristotle and Gertrude Stein and written plays that cleverly bridged the experience of ancient Greek and Shakespearean actors with contemporary theater. That is, when he wasn’t giving outrageous performances in adaptations of Virginia Woolf’s “Orlando,” Neil Gaiman’s “Coraline,” and lesbian pulp fiction. Or the odd Adam Rapp play, or a Broadway revival of George S. Kaufman and Edna Ferber’s “The Royal Family.”

As if to prove there is nothing he cannot do, now Greenspan has tackled Barry Connors’ 1925 living-room comedy “The Patsy,” in which teenage sisters vie for male attention under the hawk-like scrutiny of their meddlesome mother and indulgent father. In this adaptation, devised in collaboration with Jack Cummings III and Kristina Corcoran Williams (the artistic director and resident dramaturg of Off-Broadway’s venturesome Transport Group), Greenspan plays all the characters. No wigs, no makeup, no quick changes. He’s dressed simply in gray slacks, white shirt, a purple sweater, and black shoes. He makes everything happen through his voice and impeccably stylized physical gesture, flowing seamlessly with scarcely a pause for breath through all three acts in 75 minutes. There’s never a doubt who’s speaking—punchy salesman dad, hysterical mom, self-centered slutty Grace, insecure Patricia, rich kid Bill Caldwell, or wounded nice guy Tony Anderson.

The play may seem like a silly sitcom precursor, with stock characters and predictable episodes, the better for one agile performer to move through in a way that conjures Ruth Draper or the second act of Lily Tomlin’s “The Search for Signs of Intelligent Life in the Universe.” But there are moments of period grit in this portrait of a working-class family striving for status when money is tight, and they resonate clearly today. On top of all that, without pounding it with a sledgehammer, Cummings and Greenspan frame the production as a demonstration of the power of theater to tap the imagination through mere suggestion. Greenspan’s modest costume that allows him to play everybody works within Dane Laffrey’s smartly understated living room set, which has no doors (Greenspan has to enter from the audience, through the fourth wall, as it were) and which doesn’t exactly match the stage directions in the script (which Greenspan recites as part of the text). The doorbells and ringing phones come from ostentatiously scratchy vinyl sound effect records, a touch of slapstick and one element of the production that did not necessarily gain meaning or depth with repetition, although it did give the production a family resemblance to Lypsinka’s lip-synch extravaganzas.

“Jonas,” a new piece written by Greenspan himself and performed on weekends after “The Patsy,” is even more minimal—it’s just the actor sitting on a stool at centerstage, activated primarily by Mark Barton’s superbly balletic lighting—yet even more evocative and multilayered. This rhapsodic 45-minute prose poem takes us backstage at Doug Hughes’ 2009 revival of “The Royal Family” for Manhattan Theatre Club, in which the virtuosic Greenspan played the tiniest role of Jo, the butler. With a couple of hours to sit just offstage in half-light waiting for the occasional entrance and collecting a Broadway salary, Greenspan found himself inventing an elaborate biography for his character. Now 133 years old, Jonas reminisces about his life with the Cavendishes, the show-biz family (based on the Barrymores) whose living room we peek into for a few months in 1927 thanks to Kaufman and Ferber. And Greenspan further imagines that while Jo polished silverware and served cocktails, he himself was also a writer, dreaming up a character named McQuaid, an alcoholic writer inhabiting the shadow world of 1920s gay New York, a world that Jonas observes but does not live. It is a dizzying hall of mirrors that Greenspan walks through with his incomparable bravura.

What’s so extraordinary about Greenspan’s body of work is how it encompasses both a highly intelligent overview of theater history and philosophy with a deeply personal and remarkably humble exploration of the existential experience of an actor—not a star or celebrity or legend but a workaday actor. There have never been too many people with his skills, breadth, talent, and passion. Sarah Bernhardt, Charles Ludlam, and Neil Bartlett come to mind. Anyone who loves the art part of theatergoing should add Greenspan to your must-see list. You won’t want to kick yourself later for passing up opportunities to see work as beautiful as this.