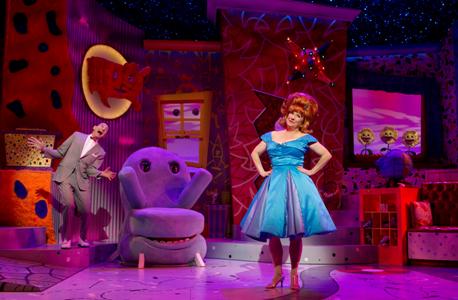 Watching “The Pee-Wee Herman Show” live on Broadway, at least for a diehard fan like me, is a little like listening to a Beatles album. It’s hard to remember a time when those things didn’t exist. They’re so original, and so embedded in contemporary pop culture, that it takes effort to see and hear them freshly. The original “Pee-Wee Herman Show” emerged as a midnight show at the Groundlings Theatre in 1981, but most people know it from its incarnation as a Saturday morning show on network television starting in 1986. “Pee-Wee’s Playhouse” was a kind of triple-whammy— an arty homage to classic kid shows like “Howdy Doody” and “Captain Kangaroo” as well as a super-hip irony-drenched postmodern comedy celebrating nerd chic, all masquerading as an innocent show that actual children could actually watch and delight in. Now, after the TV show has come and gone and after Pee-Wee’s creator Paul Reubens has spent years suffering the consequences of sex scandals (he likes porn— gasp!), the live show is two things that Broadway loves (and cynics gripe about): a revival of a pre-existing hit and a commercially sure-fire star vehicle, while at the same time being a subversive piece of brilliant performance art.

Every tiny element that made “Pee-Wee’s Playhouse” insanely enjoyable on TV has been scrupulously recreated on the stage, starting with the spiky-haired guy with the too-small grey suit, red bowtie, and crazy laugh, and extending to all the beloved characters, both flesh-and-blood creatures and puppets. It’s one thing for the audience to cheer at the sight of Miss Yvonnne (Lynne Marie Stewart) and Jambi (the genie-in-the-box played by John Paragon). But when Chairry, and Pterri the Pterodactyl, and even Pee-Wee’s beloved ball of foil get entrance applause, you have to marvel at the bizarre universe that Paul Reubens has gotten the world to accept.

The Broadway show crams into 90 minutes tons of the most familiar features and favorite lines of “Pee-Wee’s Playhouse”— a magic word that cues the audience to scream, a Penny cartoon, and playground chants like “I know you are but what am I?” There’s a storyline of sorts, tracing Pee-Wee’s heartfelt wish that he could fly, and a few updated running jokes. One of them has to do with fragrances (“I’m wearing some toilet water! It was an accident”) and another has to do with the havoc unleashed when a character as ADD as Pee-Wee gets a computer and goes online. He goes from his first e-mail to his first IM to manically repeating “ttyl! Lol! Ttyl! Lol!” in about a minute and a half, until the system crashes, and the lights go out in the theater. This sets up an ingenious new blackout sequence in which the characters stumble around in the dark making the kind of remarks that mean one thing to kids and another to (dirty-minded) adults. Magic Screen: “That’s not a flashlight…That’s not my belly-button either!” And when the lights come up, how come Fireman Phineas is hastily adjusting his uniform?

For the Broadway production, the original “Pee-Wee’s Playhouse” team has been augmented by a couple of inventive young artists, the brilliant puppetmaster Basil Twist (of “Symphonie Fantastique” fame) and director Alex Timbers (“Bloody Bloody Andrew Jackson”), whose contributions help make the show feel fresh and alive in the theater. Does the show mean anything to someone who’s not in the cult? I confess that I’m in no position to guess that. I couldn’t help thinking of “Spamalot,” a show that ran for a couple of years and won a lot of awards but for me was a weird exercise, giving pleasure only to Monty Python fans who showed up to cheer bits they’d already enjoyed in the past. But in that case, I was on the outside looking in. My experience from inside the world of “The Pee-Wee Herman Show” was pretty much unadulterated joy.