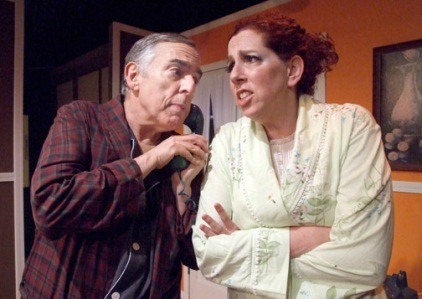 The Prisoner of Second Avenue

There are no rose gardens in New York City—at least, none that have been promised to any of the city’s 8-plus million inhabitants—but there are plenty of stinging nettles, thistles and thorns that afflict New Yorkers daily, all of which are in full (if figurative) bloom in Neil Simon’s “The Prisoner of Second Avenue.”

Simon is to all these urban irritants what the botanist Luther Burbank was 100 years ago to flowers and plants: a cataloger. But with this key difference: Neil Simon is a very funny cataloger.

Consider the plight of the two New Yorkers in “Prisoner”: Mel and Edna Edison. They’re a middle-aged couple in one of the newer high-rise apartment buildings on Manhattan’s Upper East Side. The building looks better than it lives, which is to say: the walls are transparent to all sound, whether from the two Lufthansa stewardesses next door or the traffic 14 floors below on Second Avenue; the plumbing is erratic; the heating and air-conditioning systems are either the Sahara or Antarctica, with nothing in between, and the superintendent is always busy—supposedly—fixing some other tenant’s problems.

Add stinking, uncollected garbage down on the street; foul, unhealthy air; an economic recession and uncertain job market; a crime wave, and you have Mel and Edna’s New York of the early 1970s.

The play opens with Mel (Mark Belnick) sitting forlornly on his living room couch at 2:30 a.m., unable to sleep. It’s a hot summer night but their apartment’s air-conditioner seems stuck on “high.” “I’m frozen stiff,” he tells Edna (Kimberly Lewis) when she tries to coax him back to bed. “One night, they’ll put it on ‘high’ and they’ll need a flame-thrower to get us out.”

Mel is also riled by the Lufthansa stewardesses—“the Red Baron’s twin daughters,” he calls them—and their partying. He bangs on the intervening wall to quiet them; they bang back in the classic New York riposte: “Up mine? Up yours!” His ranting awakens the occupants on the fifteenth floor above and almost immediately he’s in a verbal firefight with them as well, a conflagration that’s literally doused when they dump a pitcher of water on him.

And so it goes. Mel gets laid off by his firm and cannot find a new job. He becomes more and more embittered and takes it out on poor Edna.

They’re burglarized one day when both are out; the thieves steal just about everything from the apartment, even the contents of the Edisons’ medicine cabinet. How did the burglars get in, Mel wonders, noticing there’s no signs of forced entry on the front door.

“Maybe they found my key in the street,” says Edna, revealing she had lost it some time earlier.

“If you didn’t have your key,” Mel asks, “how were you going to get back in after you’d gone shopping?”

Edna can give as well as receive. “I was only gone five minutes,” she snaps back. “What was I supposed to do? Take the furniture with me?”

Their troubles multiply when Edna’s company goes bankrupt and now she too is unemployed. Mel has a nervous breakdown.

Only a comedic alchemist can spin gold from such dross and Neil Simon does just that when he brings together Mel’s brother, Harry (Alan Brooks), and three sisters, Jessie (Lydia Weiss), Pearl (Milda Dacys) and Pauline (LB Zimmerman) in apartment 14A to see what assistance they might—might—provide the Edisons.

Edna tells them her idea: she and Mel get the hell out of New York and settle somewhere “in the country, running a summer camp for children.” How much money would they need to do that, the siblings ask? “Twenty-five thousand,” Edna replies.

Who else but Neil Simon could derive explosive laughter by doing nothing after such a simple line? Simon does exactly that—nothing, as in absolute, total silence, not a single word or smallest gesture from any of the four actors. They just sit there, paralyzed, staring fixedly straight ahead as the audience erupts in wild laughter.

Belnick portrays Mel with all the hair-trigger anger of Jerry Stiller’s Frank Costanza (“Seinfeld“) and Lewis is admirable as Edna, at times a witty counter-puncher and at other times a vulnerable, caring woman. Weiss’ Jessie is a reticent big sister given to platitudes; Dacys’ Pearl is cheerfully but loopily unhelpful and Brooks’ Harry is unbearably pompous. Zimmerman’s Pauline is the pearl among the supporting cast, as she gets to toss off some of Simon’s most acerbic lines.

“If you’re a human being you reserve the right to complain,” Mel declares early in the play. “When you give up that right, you don’t exist anymore.”

Indeed. “Prisoner” ends on a stoic note, with Mel and Edna sitting together on the couch, his arm around her, her head on his shoulder. You know that somehow they’ll survive. After all, they’re New Yorkers.