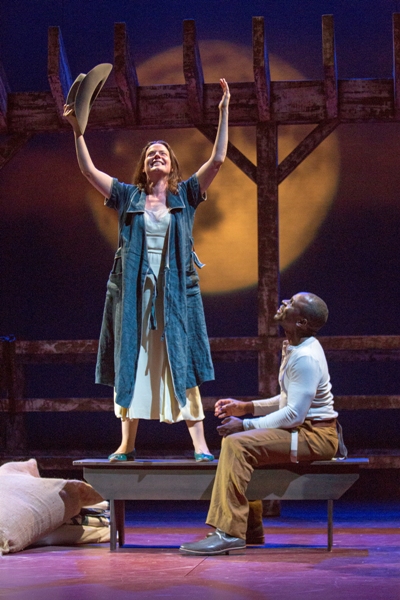 The power of hope during hard times is at the heart of an American classic, “The Rainmaker,” receiving a compelling revival production at The Old Globe.

Set in a drought-ridden rural town in the 1930s, “The Rainmaker” tells the story of a pivotal summer day in the life of plain-spoken, plain-looking Lizzie Curry (superbly portrayed by Danielle Skraastad). Unmarried and quickly approaching her society-decreed shelf life, Lizzie keeps house for her father and two brothers on the family’s once prosperous now parched cattle ranch. Despite increasing numbers of livestock dying in their tracks, the men folk exhibit more despair over Lizzie’s marriage prospects.

The tale begins just after Lizzie’s return from a week-long trip, arranged by her father, H.C. Curry (John Judd, in a heartfelt performance), to visit distant relatives and their bumper crop of boys. The trip was for naught, as Lizzie relays the humiliation of being appraised like a heifer only to be left in the bridal arena without a single bidder.

Undaunted, H.C. tells Lizzie to set another place for supper and heads to town to fetch a fella. Accompanying H.C. are sons Noah (Peter Douglas), who is all business as the ranch foreman, and on-the-cusp-of-manhood Jim (Kyle Harris), an endearing tangle of bluster, angst, and hormones. The trio comes up dry when lawman File (Tug Coker) senses a courtship trap disguised as an innocent invitation to a poker game. An earlier scene between File and Sheriff Thomas (Herbert Siguenza, well known to San Diego audiences as a founder and performer of the politically charged performance group Culture Clash) reveals why the deputy, who is sweet on Lizzie, is gun shy of matrimony.

That extra chair at the table is soon occupied when a gust of wind flings open the Curry’s front door and in strides Bill Starbuck (Gbenga Akinnagbe, whose performance is uneven: less convincing in dealing with the men, more effective and sizzling in later love scenes with Lizzie).

Starbuck wastes no time becoming enmeshed and embroiled with everyone’s lives. His charms and cajoling, however, receive decidedly mixed reactions: Lizzie and Noah take an immediate dislike and distrust of him while Jim’s admiration verges on adoration of the stranger’s cock-sure manner. H.C., too, falls under Starbuck’s spell and doesn’t bat an eye at handing over $100 in hard-earned cash in exchange for an audacious promise to open up the skies.

Director Maria Mileaf meets and exceeds formidable challenges in bringing this heritage play to today’s stage, not the least of which is making the audience forget the memorable 1954 film starring Burt Lancaster and Katharine Hepburn and putting aside, in order to inhabit Lizzie’s world for an evening, the enormous gains in social equality made by women in recent decades.

Katherine Roth’s costume design is for the most part monochromatic in keeping with the diminished nature of the times. The exceptions are a flattering lemon frock Lizzie dons in anticipation of a gentleman caller and the golden-wheat color of Starbuck’s suit: an unspoken promise of the return to prosperity.