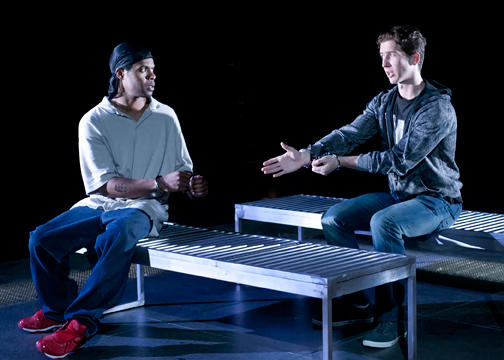 What does it take to be successful in America? What does it mean to be a friend? The Recommendation, Jonathan Caren’s stirring new play, asks these and other questions but doesn’t necessarily provide answers. You have to fill in the blanks.

The story begins with college roommates meeting for the first time in their dorm room. Aaron Feldman (Evan Todd) is an aggressively affable child of privilege. Life is like a vending machine to him: pull the right levers and candy comes out.

Iskinder Iudoku (Brandon Gill) is the son of a Somali immigrant father and an American mother. He has been taught to work hard but is already falling away from his father’s values. Feldman teaches him an old standard: who you know is indeed as important as what you know. But Iskinder (aka Issy) has only one lever to pull to get the goodies—Feldman.

Their friendship continues through college and afterward. Feldman’s father helps Issy into law school and both friends settle in LA. Things are moving forward according to plan when Feldman is forced to spend a night in jail with Dwight Barnes (Jimonn Cole). For Dwight, every lever he’s ever pulled has given him garbage. But then he meets Feldman and gets a glimpse of a world where people use their influence to help you out. In a great cast, Cole stands out, milking every ounce of his character’s ambiguity. Is Dwight a base opportunist or does he simply see an opportunity for fair treatment?

They are all archetypal characters: the gregarious rich kid; the shy, studious immigrant’s son; the sly, misunderstood thug. But cut through the veneer and you find unforeseen complexity. Some of that outward character is for show, a protective shell.

Todd’s Feldman cycles between humorous party boy, petulant brat and frightened child. Gill’s Issy, who narrates, is upright and intense. He is searching for the moral vocabulary to simultaneously take care of himself and do the right thing. Cole’s Dwight has a restrained Samuel L. Jacksonian menace. But is it really menace or does he raise his voice because he just wants to be heard?

Munby’s direction is equally comfortable with the comedic early scenes and the intense latter ones. The tension builds and builds. The minimalist metallic set perfectly underscores the action—in the dorm, by the pool, in jail.

“The Recommendation”—you’re not going to shrug this one off in the parking lot afterwards. It’s going to stay with you a while.