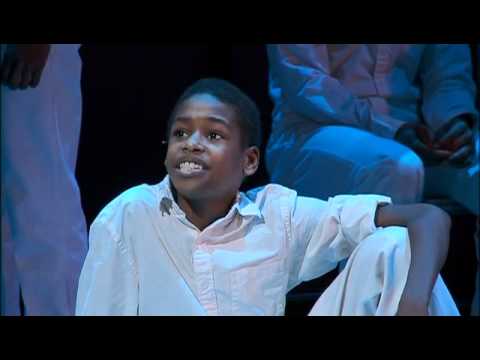 From left: Jared Joseph, Ron Holgate, and JC Montgomery in “The Scottsboro Boys” at the Old Globe
Photo by Henry DiRocco

If your knowledge of the Civil Rights Movement begins when Rosa Parks refused to take a seat in the back of a city bus in 1955, I’d like you to meet “The Scottsboro Boys.”

Bringing this racially charged story to the stage was the final collaboration of the legendary composer-lyricist team of John Kander and the late Fred Ebb (“Cabaret” and “Chicago”), who chose a musical form of the era — the minstrel show — to tell the tale. It’s a gutsy move that will raise eyebrows and will at times cause audiences to squirm. It’s also is a smart move that allows both black and white stereotypes to be exposed, exaggerated, and ultimately exploded.

Minstrelsy is a uniquely American art form that, at the time of the Scottsboro trials, was considered mainstream entertainment, especially in the South. The Interlocutor (played by Broadway veteran and Tony Award winner Ron Holgate) serves as the show’s Master of Ceremonies and calls upon the performers to tell their stories in dance and song. The show also incorporates the antics of two end men known as Mr. Tambo (JC Montgomery) and Mr. Bones (Jared Joseph).

Given the impossibility of fully developing nine central characters in the course of a performance, a few receive spotlight treatment; most notably Haywood Patterson (Clifton Duncan), who entered jail illiterate but educated himself during his lengthy incarceration and ultimately authored the book “The Scottsboro Boys.” Duncan’s poignant rendition of “Go Back Home” will have you searching for the song on YouTube.

Minimal set design utilizes interlocking metal chairs that, together with a plank or two, are deftly reconfigured by cast members with the fluidity of their dance moves to convey a scene’s mood: The carefree bounce of a freight car, a stifling court room, outdoor terrain, and trip hazards as Haywood makes a futile escape attempt, or a pinched jail cell window through which one of the accused glimpses a street hawker selling lynched Scottsboro Boys dolls to a frenzied mob.

It is an important story and theater that deserves a large audience. Because lest we think the injustice of the Scottsboro trials and the minstrel era are relics of the past, vestiges remain in unlikely places.

Opening night of The Old Globe production coincided with this year’s running of the Kentucky Derby. That afternoon a record crowd of 165,307 in Louisville, and millions of broadcast viewers, sang a sanitized version of the minstrel favorite “My Old Kentucky Home” blissfully unaware of the original Stephen Foster lyrics: “The sun shines bright on my old Kentucky home / ‘Tis summer, the darkies are gay.”

It took a lone African American legislator in the Kentucky House of Representatives to author a bill that officially changed “darkies” to “people.” But that wasn’t achieved until 1986, more than two decades after Congress passed the Civil Rights Act of 1964.