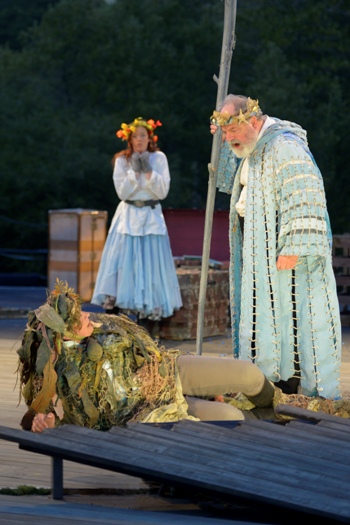 It may not be a “Tempest” in a teapot, but Cal Shakes’ new production of what is arguably Shakespeare’s most poetic play sure could use a larger vessel to sail into its new season. Double-casting is the villain here, as much as any double-dealing duke or courtier, and the result looks like Shakespeare-on-the-cheap. A couple of extra actors would have gone a long way to curing what is wrong with this staging, and accentuating what is right.

Michael Winters takes the pivotal part of Prospero, the exiled Duke of Milan, unjustly ousted by his brother and washed up on a remote island where he has made himself both a master magician and a king. In the first part of the play we get a folksy Prospero, presiding benignly over the sprites and servants who serve him. It is only in the second act that Winters assumes the gravitas essential to the wronged wizard’scharacter. But, by then it is too late, because he also plays the drunken shipwrecked Neapolitan butler Stefano (and very well too). One tends to get them mixed up in spite of the lightning-quick (and minimal) costume changes.

It is the same deal with his beloved daughter, Miranda, played by Emily Kitchens as a kind of island hillbilly. Wearing a homemade wreath of mismatched flowers, boots and a shirt and skirt out of the 1980s (highly peculiar costumes by Anna Oliver), she delivers her lines in an annoying sing-song. But then she comes on as Sebastian, another one of the castaway baddies and, though her delivery is better, her presence is confusing as we have just seen her as the heroine. And so it goes: her lovelorn swain, Ferdinand (Nicholas Pelczar), heir to Naples, also is the drunken clown Trinculo — inexplicably wearing Scottish kilts for both. More gender-bending ensues when the island monster, Caliban, who is Proserpo’s reluctant servant, doubles as Antonio, the usurper of Prospero’s throne. Catherine Castellanos is very angry and very good in both parts, yet you are conscious that they should be played by men.

Thank goodness they left Ariel, Prospero’s ethereal servant who accomplishes much of his magical mischief, alone. Erika Chong Shuch, who also choreographed the show, is lovely in the role. Assisted by three other dancers, she flits and flies through the action, entering and exiting through a greenery-filled wardrobe. There are butterflies in her hair and sometimes she seems to be a butterfly herself. James Carpenter has the small role of Alonso, the Duke of Milan, and he dispatches it with his usual seriousness and skill.

The set, by Emily Greene, is built around the wreck of Prospero’s boat, all flotsam and jetsam with sea chests opening to reveal a wealth of props, nets, bollards and, most of all, books all over the place. It possibly is the most successful element of the production.

“The Tempest,” a late play, is frequently read as Shakespeare’s swan song, his farewell to the theater, especially in the speech “Our revels now are ended…” and subsequent references to breaking his staff, drowning his book and abjuring the “rough magic” that has furthered his enterprise, exposing his enemies, regaining his kingdom and ensuring his daughter’s future happiness. To his credit, Winters did these proud, perhaps in honor of the Bard. But, frankly, much of the rest was a mess.