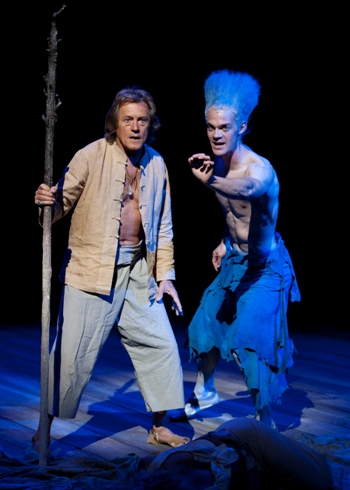 Brief confession: The Tempest has never been one of my favorites, until now. Directed by Adrian Noble, The Old Globe’s production at the Lowell Davies Festival Theatre falls just short of incredible and well beyond good.

Set on a magical island, the play embraces typical Shakespearean themes: ambition, betrayal, servitude. Prospero (Miles Anderson), the rightful Duke of Milan has been banished to the island with his daughter Miranda (Winslow Corbett) for a dozen years by his usurping brother, Antonio (Anthony Cochrane) and Alonso the King of Naples (Donald Carrier). Learned in the magical arts, Prospero intuits that a ship containing Antonio, Alonso and others will pass near the island and conjures a storm to wreck it and bring his betrayers to ground. Once there, Prospero initiates an intricate plot to restore himself and Miranda to their rightful places in the world.

Prospero is aided in his machinations by a number of spirits, most notably Ariel (Ben Diskant), who is held in servitude by Prospero and hopes that his good service will earn him freedom. As the story unfolds, Prospero and allies manipulate Antonio, Alonso and his son Ferdinand (Kevin Alan Daniels) and others, luring them into his clutches.

Though quite funny at times, the production excels in its poignancy. In particular, the interchanges between Prospero and Ariel, in which the slaveholder holds out the promise of freedom to propel his plan forward, are at times deeply moving. An old pro, Anderson recites his lines as if they only just appeared in his head. And Diskant’s Ariel, played with restrained glee, is palpably bewitched by the prospect of freedom. The interplay between the two is, in and of itself, magical.

Other standouts include Jonno Roberts, whose Caliban alternates between surly victim and surly oppressor and John Cariani, whose unexpected interpretation of the jester Trinculo marries Renaissance Italy with Brighton Beach. Special props to Kevin Alan Daniels, who doesn’t have many lines but steals scenes with body language.

And the music: The persistent beating drums, the short snippets of song, the chorale of singing spirits. Shaun Davey’s original music evokes the island’s magic—threatening to strangers but a comfort to those who belong there. And don’t miss the dancing during intermission. Really, don’t do it.

Ralph Funicello’s scene design is effective, often using a parachute-like piece of fabric to convey a variety of actions. Adrian Noble’s direction is fast-paced and nicely realized. I feel I should say something cynical and biting, but have no idea what it would be. This is a real treat.