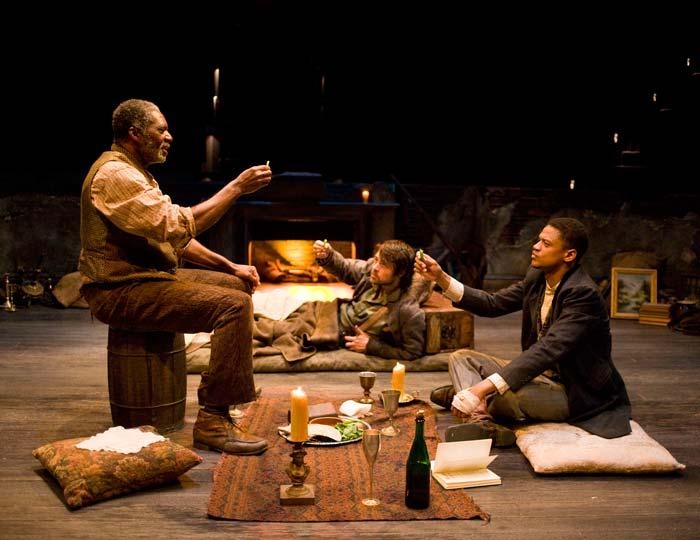 Matthew Lopez’s “The Whipping Man” is a Civil War story set in Richmond a few days after Lee’s surrender. Caleb DeLeon, a wounded Confederate officer played by Mark J. Sullivan, arrives mysteriously at his ancestral home, where he only finds ruins and two of his family’s former house slaves—Simon and John. He is greeted by Simon, who has been with the family since Caleb’s grandfather’s time. Caleb’s father and Simon’s wife and daughter are ominously missing.

Played by Charlie Robinson, Simon is proud but deferential by habit. He quickly tends to Caleb’s week-old leg wound and soon discovers the leg is gangrenous and must be amputated. After some argument, Simon performs the operation on the ruined mansion’s floor, with help from John and a bottle of whiskey. The scene is powerful and squirm-inducing and perhaps the dramatic highlight of the play.

Simon is both compliant and fully aware that he need no longer be compliant. Unsure of what any of this means, he is hedging his bets in hopes of future security. John, played by Avery Glymph, is the young angry one, subsisting on the whiskey, books and food scraps he steals from deserted mansions. As might be expected, the distinction between former and current slave is somewhat lost on Caleb.

The confused former slave-holder, the respectful, older former slave, the angry, younger former slave, the differing points of views held by slaves and slave holder—this is all well-worn ground. The uniqueness stems from the DeLeon family’s Jewish faith, which the former slaves adopted years before. While Caleb recuperates, Simon and John prepare a makeshift Passover Seder.

The overlapping ironies of Jews (whose identity is tightly meshed with their own slave heritage) holding slaves, and black former slaves celebrating Passover within days of their emancipation provide the basic structure while these three try to figure out what happens next. John stalks the room. Simon tends to things. Caleb props himself up on an elbow.

As the play continues Caleb, who is now dependent on his former property, must endure uncomfortable revelations as both John and Simon seek to impress upon him that slaves—even relatively well-treated slaves—are still slaves.

Robinson and Glymph do a nice job, though the former trips over a few more lines than you would like. Sullivan seems quite capable, but is limited by his character’s inability to walk. Giovanna Sardelli’s direction is competent, if uninspired. The set (by Robert Morgan) is minimal and nicely done and the Old Globe’s Sheryl and Harvey White Theatre is a gem. The Globe production is the play’s West Coast premiere.