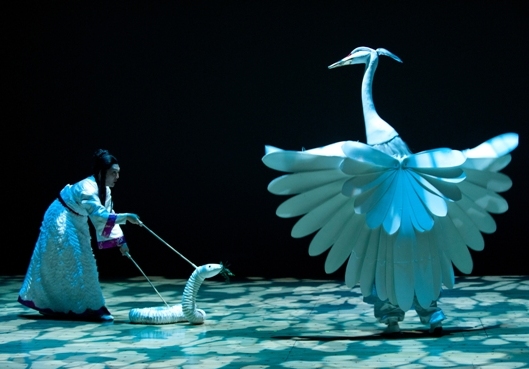 Nobody does gorgeous like Mary Zimmerman. The Chicago-based award-winning writer/director (“Metamorphoses,” “The Arabian Nights”) favors fables and myths — although she has tackled reality, history, opera, etc. — and dresses them up with incredible costumes and sets. Her latest, “The White Snake,” based on an ancient Chinese fairy tale and being co-produced in a world premiere by the Oregon Shakespeare Festival in Ashland, where it premiered this summer, and Berkeley Rep is a feast for the eye. The story, however, is geared more to 12-year-olds than adults. Nevertheless it’s a holiday treat for either.

A white snake (cleverly represented by a puppet, moved on sticks by an actress) lives a lonely, scholarly life on a faraway mountain. She has studied self-perfection for some thousand years in hopes of joining the ranks of the Immortals, the gods of the place. Visited by her equally-isolated but less enlightened friend, the green snake, she is convinced to shift her shape to human form and fly on the clouds down to a city of humans.

When they emerge from the ether, the white snake has become the beautiful Lady Bao (Amy Kim Waschke) and her companion, the wise-cracking servant Greenie (Tanya Thai McBride). Soon Bao meets and falls madly in love with a lowly pharmacist’s assistant, Xu Xian (Christopher Livingston), who, not being too bright and similarly smitten, rushes into marriage in spite of the doubt that plagues him in the form of a woman with long, tickling fingers. All is well for a time and the newlyweds prosper (not without the considerable use of the snake lady’s magic powers) until the villain enters in the form of the scheming Buddhist monk Fa Hai (ACT favorite Jack Willis).

What follows is an epic battle between the forces of good and evil; doubt and devotion, told in story-theater, dialogue, dance and — most of all — stunning stage pictures. Blue ribbons float down to signify rain. Flowers bloom on a rear video screen, sometimes the snake is depicted by undulating white parasols and glowing red lanterns illuminate the bridal scene. A beautifully choreographed fight is more ballet than battle and small ships criss-cross the stage during a festival. Presentation is all, and the true stars of the show are Zimmerman, who imagined it, Daniel Ostling who designed it, costumer Mara Blumenfeld and lighting wizard T.J. Gerckens. Live music, well performed by a trio on flutes, strings and percussion, was composed by Andre Pluess.

The story may be simplistic and the acting a little stilted but, if you watch carefully, “The White Snake” will slither into your heart to work a kind of magic that can take you back to when you were a child and believed in fairy tales.