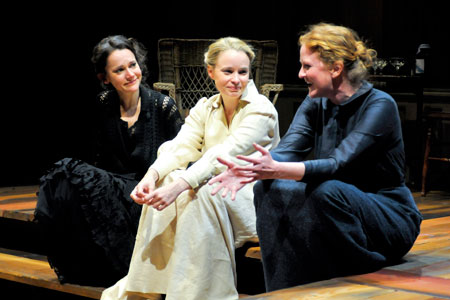 “Talk, talk, talk,” sighs the morose Masha (Natalia Payne), one of Chekhov’s eponymous “Three Sisters.” And that’s essentially what you get—three hours of “talk, talk, talk” in Les Waters’ beautifully realized production at Berkeley Rep. Yes, it glows with sun on the leaves of the birch trees and sparkles with the winter snow (dacha designed by Annie Smart and lit by Alexander V. Nichols) but, in the end it’s all a lot of conversation, most of it self-delusional. And often funny, thanks to Sarah Ruhl’s (“Eurydice” and “In the Next Room [or the Vibrator Play]”) adaptation, which teases out the humor inherent in Chekhov, even at his gloomiest.

That nothing much happens is a given. People come together and are separated, fall in and out of love—frequently with the wrong person—give birth and, on occasion, die. Kind of like life, only the life here is seen through a lens of nostalgia. The sisters: Masha, Irina (Heather Wood) and Olga (Wendy Rich Stetson) long to return to Moscow, which they left more than a decade earlier—so long ago that Irina, the youngest, can’t even remember it. And the wistful refrain of Moscow and a more cosmopolitan life is a leitmotif throughout the play. So often is it evoked that it almost becomes laughable. Meanwhile, the sisters waste away in a backwater, courted and amused by the officers of a visiting regiment. Even Masha, married off young to the boring country schoolmaster, has a fling with the unhappily married Col. Vershinin (Bruce McKenzie) and their parting, when the regiment is transferred, is the emotional high point of the play.

There is a brother in this family, although he doesn’t get credit in the title (“Three Sisters and a Brother” would be awkward indeed). Andrei (Alex Moggridge) is a romantic, artistic soul who marries a girl from the local bourgeoisie. Emily Kitchens brings a lot of spark to his Natasha, who soon takes over the house and everybody’s lives. In a way, it is a foreshadowing of what will happen to Mother Russia herself in a few years, with an epic struggle between a lazy landed gentry and an energetic middle class. Natasha is obnoxious but powerful, soon driving her husband to the gambling tables and her sisters-in-law to distraction.

Outstanding performances, in addition to Payne and Kitchens, are given by James Carpenter as the old, drunken regimental doctor and Stetson as the patient, defeated, hard-working Olga. The gentlemen of the regiment are suitably lovelorn or fancy-free, and Barbara Oliver has a nice, though brief, turn as the nanny who has outlived her usefulness.

So maybe what’s wrong with this play is what’s wrong with the lives of the people in it. “We can never have happiness itself,” one of them—armchair philosophers all—notes. “We can only wish for it, long for it.” So what you end up with is a lot of empty talk from empty people. And very little action. It all goes on too long and some cuts are in order.