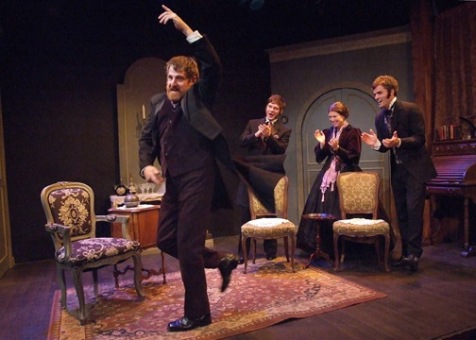 Consider the elements someone like Puccini would have had to work with: two talented musical artists, he a great composer, she a magnificent pianist, madly in love but kept apart by her implacable father; their eventual marriage, a happy one for many years and blessed with children (8); his physical ailments and descent into madness and confinement; and their friendship with—and maybe, just maybe, her adulterous involvement with—another composer destined for greatness.

This is the story of Robert and Clara Schumann and Johannes Brahms, well-told and well-acted by Bjørn Johnson, Meghan Maureen McDonough and Jeremy Shranko, respectively, in “Trio” at the Lounge 2 Theatre in Hollywood.

“Trio” is historically grounded, although the playwright, Margalit, forthrightly admits to taking some dramatic liberties with the story. What’s factual is that Brahms, then 21 years old, showed up uninvited and unknown on the Schumanns’ doorstep in 1853. He hoped to meet “the Master,” as he respectfully called Schumann, and show him samples of his musical compositions. Schumann at that time was in a funk and out of work, his music no longer as popular as it had once been and his scorn for conducting so obvious that the Dusseldorf Symphony canned him as its musical director. But he recognized Brahms’ genius and took him into the Schumann household to mentor the young composer. For her part, Clara was 34 and increasingly anxious about both the family’s finances and her own career as a concert pianist.

All true. And very well conveyed by Johnson, McDonough and Shranko, aided and abetted by Brian Normoyle and Peter Colburn in subordinate roles.

Margalit skillfully, subtlety, portrays a growing attachment between Clara and Johannes – music historians have long debated just how close that attachment was – even as Robert sinks deeper into depression. At last, suicidally, he throws himself into the Rhine only to be rescued and self-committed to an insane asylum.

Here, the playwright indulges in credible dramatic fiction: Clara and Johannes become lovers. It’s plausible, for Robert is locked away and refuses to be visited by his wife, Clara is only 30-ish and juicy, and the even-younger Brahms has been attracted to her from the start. It’s certain that they’re lovers—at least in the play—when Brahms appears one morning still getting dressed and Clara, with a radiant smile, kisses him molto con brio.

For a while, everything is bliss. Brahms looks after the Schumann children for a month or two while Clara goes on a concert tour; the experience is a tonic both for her pocketbook and her ego.

Upon her return, however, everything goes south. Schumann dies in the asylum and Brahms berates her for leaving him with her kids. It’s time, he tells her coldly and brusquely, for him to move on to bigger and better venues. It seems he’s already forgotten all that the Schumanns had done for him and, but for the fact that it would be an anachronism, he could have used that old Hollywood punch-line: “Yeah, but what have you done for me lately?”

The play ends on a sad, affecting note. As Brahms departs and the lights start to dim, we see Clara sprawled dejectedly on a chair, silent and stunned, contemplating her fate: she’s now a widow with seven children [one has died in the interim] to support, her lover has walked and her revived career is now doubtful.

“Trio” is suddenly “uno” and, as a more recent song put it, “one is the loneliest number that you’ll ever do…..”

(20131)
$5.96 (as of January 21, 2021 - More infoProduct prices and availability are accurate as of the date/time indicated and are subject to change. Any price and availability information displayed on [relevant Amazon Site(s), as applicable] at the time of purchase will apply to the purchase of this product.)
related posts