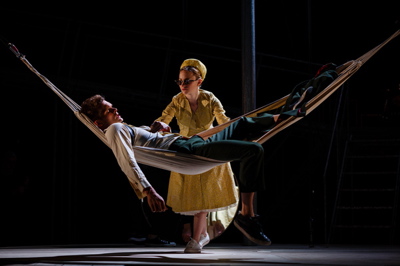 The ancient legend of Tristan and Yseult (or Isolde as she is more commonly spelled) is one of the saddest love stories every told. Who knew it could be so funny?

Kneehigh Theater of Cornwall, the good folks who brought you those highly innovative productions of “Brief Encounter” and “The Wild Bride,” that’s who. Its revival of “Tristan,” a 10-year-old National Theater hit newly opened at Berkeley Rep, uses the imagination and highly honed talents of the troupe to tell the tale of an aging Cornish king who dispatches his favorite and trusted knight to bring home an Irish princess for his bride – only to have the two young people fall madly in love (spoiler alert: potions are involved) with fatal results – fairly straight, but with a wide streak of hilarity.

Long on invention, if short on scenery (scaffolding, ramps, platforms and steps by Bill Mitchell), toy sailing ships are toted by to indicate a voyage and the audience is asked to blow up white balloons for a wedding. Costumes tend to black anoraks and wool caps for the ensemble, simple dresses for the two women in the cast, hipster chic for Tristan and business attire for the king. Nevertheless there’s a lot to look at. Fights, dances and love scenes are precisely choreographed and there are many a pratfall and sight gag to engage the eye.

For the ear there is music, ranging from 1950s and ’60s standards to country and western, doo-wop and, of course, Richard Wagner, whose opera did more to publicize this story than the previous 500 or so years of bards and scalds and troubadours. The entrance of the king is pompously accompanied by “O Fortuna” from “Carmina Burana” and everybody mambos to a (possibly archival) Yma Sumac disc. But it’s not all recorded. Musicians Ian Ross, Lizzy Westcott, Pat Moran and Russ Gold, with lead singer Carly Bawden (who also narrates), often find themselves augmented by the rest of the cast (i.e. Yseult plays a mean fiddle and her nurse, Brangian, an accordion). Not really a musical, this is a very musical show.

Performances are simply splendid. Andrew Durand (the Devil in “The Wild Bride) andPatrycja Kujawska (the Bride) are the doomed lovers, highly conflicted by their loyalty to King Mark and their insatiable passion for one another. Company co-founder and co-artistic director Mike Shepherd (with Emma Rice, who expertly adapted and directed this production) invests the king with great dignity – even when he is doing the mambo. Narrator/chanteuse Bawden, dressed in a yellow suit and pillbox hat straight from the 1960s, has a terrific voice and a bit of a sardonic twist, until the end where she is tragic as Tristan’s neglected wife. Craig Johnson, as the braggart Irish king Morholt in the beginning and, more prominently, as Yseult’s nursemaid Brangian, gets most of the laughs.

Also a hoot is Giles King as an obnoxiously obsequious courtier who, out of jealousy and sheer malice, exposes the lovers to the king (while hanging precariously over their trysting place by cables with a camera and microphone). All that’s left is the ensemble, a crowd of two played by Robert Luckay and Gareth Charlton and frequently augmented by the other players who don anoraks, watch caps and binoculars to play the “Lovespotters,” a cadre of the unloved and lonely, always on the lookout for the real thing.

And they find it in the triangle formed by Tristan and King Mark, both in love with Yseult, and Yseult, who loves them back, each in a different way. But, as the narrator tells us “potions wear off, like first love” and the conclusion is genuinely moving (cue the Wagner). The great aria at the end of his “Tristan” is called “Liebestod” — love death — and that theme runs through the entire work. Rice has chosen to emphasize the love but there will be death as well. After all the hilarity, have your handkerchiefs handy.