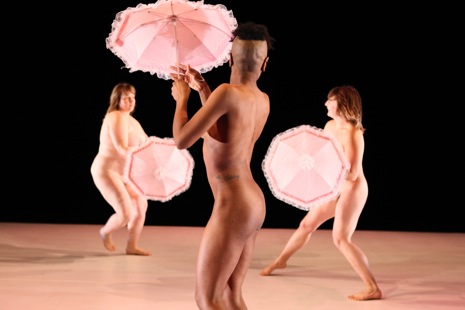 The playwright, director, performer, and conceptual artist Young Jean Lee has created nine pieces with her New York-based theater company since 2003, and no two of them have resembled one another in the slightest. I like that about her. Last year’s piece was a rock concert with her as lead singer at Joe’s Pub (“We’re Gonna Die”). Before that, a play called “Lear” at Soho Rep that didn’t have much to do with Shakespeare. Before that, an evangelical church service (“Church”), an evening of sketches performed by an all-black cast examining racial stereotypes (“The Shipment”), and an Asian theater homage/parody (“Songs of the Dragons Flying to Heaven”). Get the picture? Her most recent piece, commissioned by the Walker Arts Center in Minneapolis and presented in New York by Performance Space 122 as part of its COIL festival, puts six women stark naked on a bare white stage under bright white light with no words and a really cool sound mix for a rigorous yet playful exploration of gender fluidity and genre fluidity.

A program note explains that the playwright and performers envisioned a feminist utopia where the activities of bodies didn’t have to conform to any gender norms. At its best, “Untitled Feminist Show” matches the kind of dance and performance art works that pose a theoretical problem and systematically work through the variations (I’m thinking of Twyla Tharp’s “Fugue,” but you can probably supply your own example). The six bodies represent a whole spectrum: white and black, slender and plus-sized, butch and femme, trained and untrained as dancers, actors, musicians. I enjoyed watching all of them bravely and gamely riding the edges of gender-defined behavior, searching and sometimes finding the pockets of behavior that successfully elude being assigned one thing or another. While much of the show looks like dancing, there are a couple of wordless songs and a few pantomime sketches involving pink umbrellas that serve as magic wands, children’s games, and a slo-mo wrestling match. Almost all of them go on just a little bit too long, so that witty points get slightly bludgeoned home. What stuck with me afterwards was the impressive conceptual rigor, the exhilarating freestyle format (the ending and the curtain call both provide surprise delights), the zest for ambiguity (earnest or mocking? innocent or just oblivious?), and individual moments of performing brilliance.

Katy Pyle and Regina Rocke have the strongest dancing chops. Becca Blackwell dazzles in a solo that morphs through 19 different characters and ages and body types in the space of a couple of minutes. Hilary Clark pretty much stole the show with her solo turn, which evolves out of a laughing and jiggling group scene into a head-thrashing tour of the stage and the first rows of the audience, where she conjures insanity, heavy-metal head-banger, and monster-movie monster, among other things. Lady Rizo (aka Amelia Zirin-Brown) and World Famous *BOB* (whose bio informs us that she “lives in Brooklyn in a pink home filled with love including a toy poodle named Movie Star”) are well-known in the downtown burlesque/cabaret scene. Having seen them both first in Taylor Mac’s epic extravaganza “The Lily’s Revenge,” I appreciate them all the more for joining Young Jean Lee in the project of experimenting at the crossroads of theater, feminism, and the unknown.

(2286)
$3.15 (as of January 21, 2021 - More infoProduct prices and availability are accurate as of the date/time indicated and are subject to change. Any price and availability information displayed on [relevant Amazon Site(s), as applicable] at the time of purchase will apply to the purchase of this product.)

(18287)
$6.99 (as of January 21, 2021 - More infoProduct prices and availability are accurate as of the date/time indicated and are subject to change. Any price and availability information displayed on [relevant Amazon Site(s), as applicable] at the time of purchase will apply to the purchase of this product.)
related posts