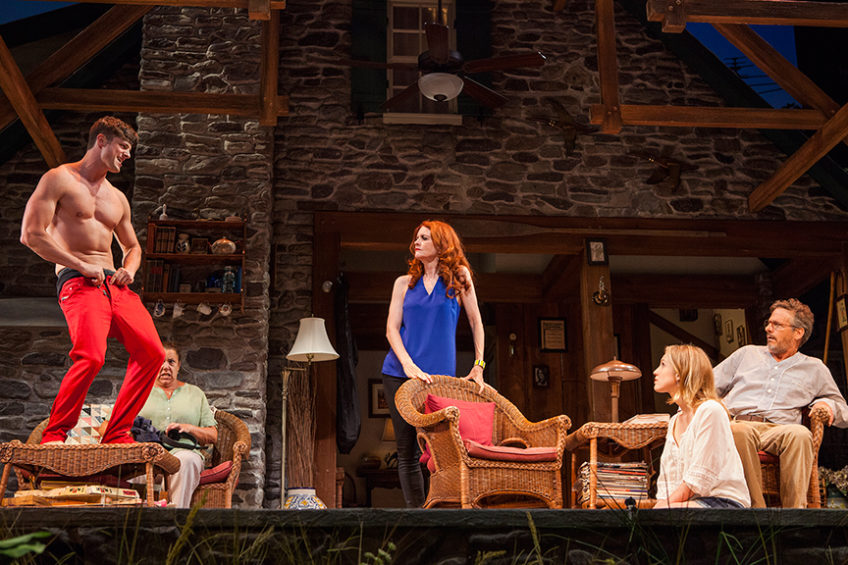 Had a good belly laugh lately? You will, courtesy of the side-splitting, Tony Award-winning “Vanya and Sonia and Masha and Spike,” receiving its San Diego premiere at The Old Globe with an acting ensemble that comes up all aces.

Vanya (Martin Moran), Sonia (Marcia DeBonis), and Masha (Candy Buckley) are middle-age siblings named after Chekhov characters courtesy of parents smitten by community theater. Like their literary counterparts, Vanya and Sonia never left the family country home. The pair is melancholy that life has passed them by, but they do little to remedy the situation; filling their repetitious days with bickering, sighs, occasional hurling of coffee mugs, and longing glances at a pond hoping to glimpse the sight of a blue heron.

Masha did take wing years earlier with aspirations of becoming a great actress. What she achieved instead is a B-movie career beginning to stall and a string of failed marriages. She seldom returns home, but make no mistake, it’s her bank account that keeps food on the table and a roof over Vanya and Sonia’s heads.

Then there’s the housekeeper, appropriately named Cassandra (Haneefah Wood in a boffo performance), whose dusting is interrupted from time to time by sudden, Mick Jagger-like head bobbing and body contortions followed by dire pronouncements to which no one pays heed. They will wish they had.

One weekend, Masha arrives with an overnight bag, an ego the size of the Chrysler Building, and a vapid boy toy named Spike (Tyler Lansing Weaks). Masha invites Vanya and Sonia to a costume party a few doors away, and, oh, by the way, she plans to sell the house out from under them. This ignites a heated argument between Sonia and Masha fueled in equal measure by the impending real estate transaction and decades of sibling rivalry. Vanya tries to keep the peace, but he’s distracted by Spike, an aspiring actor with few prospects who has a dickens of a time keeping his clothes throughout the play.

Add to this simmering pot the dewy, vivacious Nina (Allison Layman), a neighbor’s niece visiting from of town. Nina is also an aspiring actress whose effusive celebrity worship serves only to provoke envy in Masha, desire in Spike, and sympathy in Vanya.

DeBonis as Sonia is a revelation as she at first exasperates with her sulking, mesmerizes with an astonishing transformation for the party, and ultimately evokes a chorus of cheers from the opening-night audience when she makes a courageous decision that might just change her life.

Moran’s mild mannered Vanya, finally pushed too far by the ill-mannered Spike, delivers a I’m-mad-as-hell-and-I’m-not-going-to-take-it-anymore discourse on what’s been lost in terms of human connections in our increasingly self-centered, hyper-connected world. Vanya’s line-drive observations both hit home and the funny bone.

Keeping this many balls masterfully in the air is Jessica Stone, who directed the play based on Old Globe Associate Artist Nicholas Martin’s Tony Award-nominated Broadway direction. Martin tragically died less than a month before the production began its run at The Old Globe. The show is dedicated to him.

Scenic designer David Korins has created such a realistic and inviting house of rich Craftsmen elements that you’ll want to take a tour and open kitchen cabinets. Gabriel Berry’s costume design moves the story briskly along by underscoring the actors shifting depressed and manic moods, the contrast of Masha’s ridiculous Disney Snow White costume against Sonia’s sophisticated evening gown and tiara and, finally, relaxed casual wear that reflects the siblings’ new-found comfort in their own skin and with one another.

Everyone has a favorite Christopher Durang play. This one just became mine.