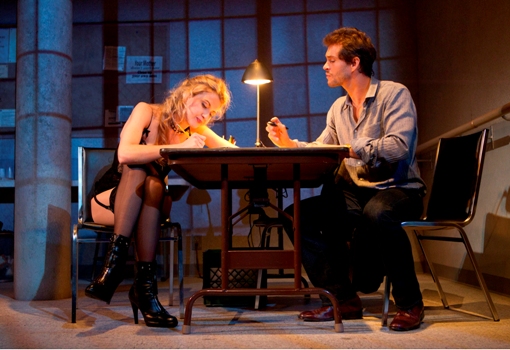 When David Ives’s two-character play “Venus in Fur” opened at the Classic Stage Company in January 2010, word traveled fast — this was a smart, funny, sexy play with a career-making performance by a young actress named Nina Arianda. Now that the show has transferred to Broadway (with a new co-star for Arianda, Hugh Dancy), a lot more people can come to that same conclusion.

The setup couldn’t be more simple. In a bare rehearsal studio, after a long day, during a thunderstorm, Vanda Johnson (Arianda) shows up to audition for playwright/director Thomas Novachek (Dancy), who has adapted for the stage Leopold von Sacher-Masoch’s classic erotic novel “Venus in Fur.” In the novel, set in the 1870s, an aristocratic poet manqué meets a woman in a fancy Eastern European spa and persuades her to make him her love-slave. Postmodern prankster that he is, David Ives (best-known for “All in the Timing” and other lightweight, super-clever comedies) squeezes this premise for every variation on power-play, dominance and submission: between men and women, actresses and directors, playwrights and audiences.

For most of the intermissionless 105-minute play, we’re happily absorbed as the two performers toggle back and forth between rehearsal-room banter as people of today and scenes from the script as they inhabit their Victorian personas as Severin von Kushemski and Vanda von Dunayev. Arianda storms in the door looking like Stefani Germanotta on a bad day (that is to say, Lady Gaga in civilian drag) — loud, wet, brash, her vulgar bravado masking showgirl neediness. When, after considerable delay, she slips into the character from the novel, her carriage and her voice instantly transform. We’re deep into another time and place, she’s taken us there, and that’s the moment when we settle in and say, “OK, this actress is something else.” She’s physically bold, free, nimble, admirably lacking in vanity, not conventionally pretty — yet her looks are as striking as a silent-film diva’s. Dancy is no slouch — his role is much less showy, but there are plenty of colors and shadings to his character, who gets to inhabit all the ways men fear, revere, dismiss, seduce, and get pulled in by women, and he’s right there with each one of them. Under Walter Bobbie’s impeccably precise and thrillingly paced direction, the actors turn on a dime, shifting in and out without ever losing the audience, keeping all the balls they’re juggling in the air with what looks like zero effort.