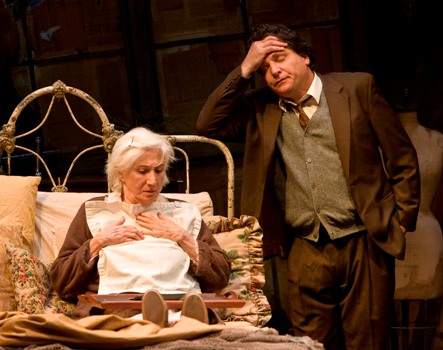 What a waste of Olympia Dukakis. Mute about 95 percent of the time she is on stage — which is just about the entire two hours — Dukakis (Grace) is stuck reacting nonverbally to Kemp (Marco Barricelli), a miserable and misery-inducing middle-age man. He has ghoulishly responded to a letter from his dying aunt. It has been 30 years since his only, and totally unsatisfactory, meeting with her; now he is highly motivated by being her only heir. Even Kemp knows he is a sorry excuse for a person. His impatience for her death drives the action, such as it is.

Grace lies in her apartment on a fussy iron bed. She is propped up on pillows, the detritus of a very long life scattered about her room. Kemp arrives with only an overnight case, a clear indication of his assumption that this vigil should not take much time. His diatribes are filled with recriminations from the past: she did not come and rescue him from a tortured childhood. Those recriminations are interspersed with quips and questions encouraging her demise, plus ideas for burial plans. Perhaps mixing her ashes in a pot with dirt so he could plant an amaryllis bulb would be a good idea? For a year his outrageous chatter goes on; Grace listens intently, eyes following him around the room. Silence is her MO. We listen to Kemp spew out sophomoric jabs frequently separated into scenelets by the momentary blackening of the stage — some are only a sentence long, some sport nary a word. Just like a hospice patient who, relieved of aggressive medical care, becomes more alert, Grace flourishes under this warped attention. She puts makeup on; she primps; she fusses with her hair; she even tends to her knitting.

Yes, there is a little more to the story and there are several clues in Act I, but, for all intents and purposes, “Vigil” is a one-man sitcom on a single set. Mind you, I am not above a well-done sitcom; it can be entertaining and relaxing. A well-done one-person performance can be a satisfying and profound experience. There is a trend among contemporary playwrights to use the instant gratification of a short laugh line as a substitute for character development, one of the joys of live theater. A play with a limited cast costs less to produce. These are not plush times. There is, however, a fundamental disconnect between the two formats.

“Why are you putting on makeup? Why don’t you let the mortician do that?” is a typical Kemp crow-on-the-cradle one-liner. It does not take many of these to get the drift of his persona and not everyone in the audience laughs after hearing one such line after another.

Barricelli does a credible job of being an embittered, wimp and Olympia Dukakis does her best to communicate in silence; though, truth be told, her few spoken lines are weak. Most importantly, the buck has to stop at writer-director Morris Panych’s door. No amount of attractive stage decor and big name actors can make up for what is essentially a weak script. In an interview, Panych was asked, with “these kind of monologues, did you/do you feel at all like you’re either giving the actor gold, or enough rope to hang himself [sic]?” Panych’s response could serve as a warning, “I don’t think about the actor at all.”

(15902)
$1.87 (as of January 25, 2021 - More infoProduct prices and availability are accurate as of the date/time indicated and are subject to change. Any price and availability information displayed on [relevant Amazon Site(s), as applicable] at the time of purchase will apply to the purchase of this product.)

(6632)
$2.06 (as of January 25, 2021 - More infoProduct prices and availability are accurate as of the date/time indicated and are subject to change. Any price and availability information displayed on [relevant Amazon Site(s), as applicable] at the time of purchase will apply to the purchase of this product.)

(13114)
$4.18 (as of January 25, 2021 - More infoProduct prices and availability are accurate as of the date/time indicated and are subject to change. Any price and availability information displayed on [relevant Amazon Site(s), as applicable] at the time of purchase will apply to the purchase of this product.)
related posts