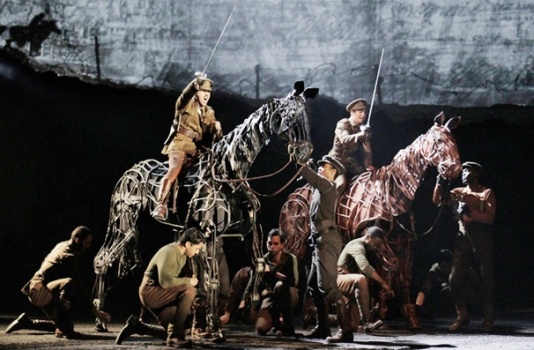 Adapted by Nick Stafford from the novel by Michael Morpurgo
Directed by Marianne Elliott and Tom Morris
Lincoln Center Theater at the Vivian Beaumont, New York

As a play, “War Horse” is true to its source material. Michael Morpurgo’s 1982 children’s novel tells the story of the first World War from the point of view of a horse raised on a farm, sold to the British cavalry, and then captured by Germans and used to pull ambulances and weapons before being reunited with the boy who raised and loved him. Nick Stafford’s adaptation has all the dutiful historical information and heart-tugging sentimentality you would expect from an adventure novel aimed at young adults, the kind that Steven Spielberg would want to make a movie of (which is indeed in the works).

As a theater piece, “War Horse”—which premiered at the National Theatre of Great Britain and has now been remounted by Lincoln Center Theater in New York—is all about the extraordinary animal puppets created by two South African designers, Adrian Kohler and Basil Jones. Each of the four horses requires three technicians to operate it: two inside the body and one outside manipulating the head. They’re beautiful to behold and somewhat miraculous in action. It is the essence of theater art to watch inanimate objects come to life in front of your eyes while every bit of the illusion-making machinery remains visible.

The horse we get to know the best, so to speak, is Joey, first seen as a feisty foal up for auction and bought by a drunken farmer in a foolish attempt to compete with his brother. The farmer’s son Billy becomes attached to Joey, a hunter by breeding but forced by circumstances to become a plowhorse. Billy’s training is the set-up for us to watch the puppeteers work their magic, as Joey the foal gives way to full-grown Joey running, jumping, now skittish, now tame, the puppeteers supplying the horse’s sounds and its breathing movements. Marvelous! These aren’t symbolic animals represented by Greek-theater masks and kothurni a la “Equus.” They’re more like the inventive animal puppets in “The Lion King,” sculptural objects with ingenious moving parts, though more realistic and less stylized.

Kohler and Jones, whose Handspring Puppet Company bases a lot of its design work on traditional African puppetry (specifically from Mali), have collaborated extensively with South African artist William Kentridge. And the theatrical style of “War Horse” (directed by Marianne Elliott and Tom Morris) bears some resemblance to Kentridge’s work in its use of not only puppets but film animation that relies heavily on simple charcoal drawings projected onto an irregularly shaped screen that floats across the wide proscenium of the Vivian Beaumont Theater.

I admired the staging of “War Horse” but ultimately found the play predictable, and once the action moves to the battlefields of France surprisingly tedious, like watching boys playing with toy soldiers all afternoon. For all that the play seems intended to convey the horror and devastation of war, the images of death and destruction are relatively antiseptic. “War Horse” makes the point that World War I was the last in which soldiers fought on horseback, helpless in the face of new technology: machine guns, tanks, barbed wire. It’s a point made quickly but that eats up a lot of stage time. The characters are generic and familiar from every war story ever told—the Good German who befriends the adorable little French girl and her beautiful mother, etc. etc. And the language is tailored for children’s theater audiences: the ferocious British battle sergeant speaks to his men about “effing” this and “effing” that. Call this vision of war “False Grit.”

The play employs a large cast, 39 actors, many of whom also sing and create scenery, story-theater style. Among them, Boris McGiver distinguishes himself as Billy’s hapless father, as do Alyssa Bresnahan as his long-suffering wife Rose (she has an unusually strong, commanding voice for a small woman) and handsome Peter Hermann in the Good German role. But of course the performers who carry the show are the 12 puppeteers who turn chunks of wood and fabric into living, breathing horses.

As usual, Lincoln Center Theater publishes a special issue of its in-house journal devoted to the production, and it provides some insightful material that enhances the audience’s experience of the play. (Some of the information is reprinted in the Playbill, such as the grim tally of WWI casualties—10 million soldiers lost their lives between 1914 and 1918, and something like 8 million horses.) The interview with Kohler and Jones, the puppet designers, is fascinating (as is their TED talk, viewable online here). As a consideration of the relationship between humans and animals in the context of war, though, I must say that the essay by Jay Kopelman about his experience with a dog he encountered while deployed in Iraq as a Marine struck me as deeply and powerfully as anything I saw onstage in “War Horse.”