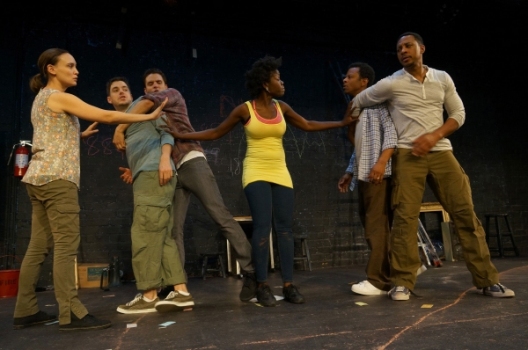 ‘We Are Proud to Present a Presentation About the Herero of Namibia, Formerly Known as South West Africa, From the German Sudwestafrika, Between the Years 1884-1915’

“Proud To Present” – shorthand for the 26-word mouthful of this play’s title – is a play within a play. Actually, it’s a play within an inchoate play; it’s set in a rehearsal hall where six young actors, two women (one black, one white) and four men (two black, two white), are trying to get their arms, their minds, their emotions, around an event that took place long ago and far away.

That this play is supposedly embryonic provides the seed of tension that, over the course of almost two hours, blossoms into an interesting, provocative, sometimes funny but increasingly painful, thorny bush.

It starts so casually – the six actors casually stroll on-stage, one by one, just as they would for any rehearsal – that more than a few chateratti in the audience kept on talking until more alert members hushed them.

Reading from a handful of notes that are as disordered as they are unclear, Black Woman makes a brief presentation about the play’s premise – an atrocity committed by German troops 100 to 130 years ago against the indigenous Herero tribe in the southwest African country of Namibia. It falls to the players to take this sketchy overview and buttress it with readings from letters written by those German soldiers to their families, friends and/or girlfriends more than a century ago. The three white characters are ignorant of this history (indeed, I’d venture to guess that 99.9% of the audience was also) and they struggle, like students in a Stanislavski method-acting class, to find empathy, motivation, their dramatic footing in the soldiers’ accounts. In short, they flounder. The three black characters may be just as uninformed of the Herero tribe’s tragic history, but their racial antennae are more finely tuned than their colleagues; they smell genocide.

“No, no, no!” Black Man shouts. “This is not some ‘Out Of Africa,’ ‘African Queen’ bullshit, okay? If we’re in Africa, I want to see some black people.”

By play’s end, we do see some black people – specifically, the Herero as personified by Another Black Man, and it’s not a pretty sight.

The players, of course, are not as inexperienced as the author Sibblies-Drury pretends; indeed it is to their credit – and the sensitive direction of Jillian Armenante — that they have us believing in their youthful naivete, their confusions, their angers and their painful outcomes.