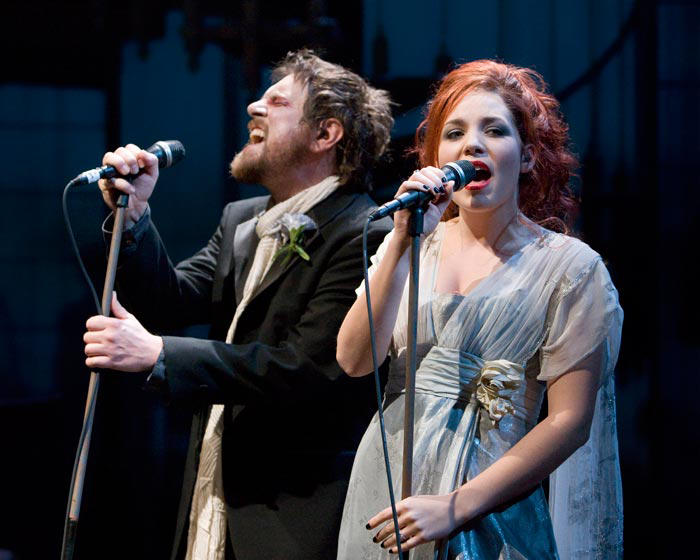 Whisper House is the astounding new musical by Duncan Sheik (Spring Awakening) and Kyle Jarrow, in which two ghosts guide us through a mystery-filled and magical journey. The story, set in 1942, is that of a Chicago boy, Christopher, who loses his father to war and sees himself forced to move to a haunted New England lighthouse, where his aunt Lilly will attempt to care for him. There, the dangers of World War II inspire present fears and let past deceptions manipulate residents and visitors alike.

David Poe and Holly Brook helm the cast as the two charismatic and whimsical singing ghosts. Through the amazing songs of Duncan Sheik, they push and pull characters through the story, influencing and judging their actions. Only Christopher can see them and for this very reason, the boy is the primary recipient of their attention.  But neither he, nor the other individuals on stage, will break into songs during the course of this unique musical (directed by Peter Askin). The ghosts own that privilege. As a result they provide the play with a one-of-a kind, powerful soundtrack, that not only enhances emotional moments, but also reveals to the audience crucial parts of the story.

Mare Winningham is the lonely aunt Lilly. The Emmy Award-winning actress very successfully brings forth the peculiarities of the lighthouse keeper and, thanks to the excellent book written by Kyle Jarrow, is able to take full advantage of the humor-filled dialogue.  The young A.J. Foggiano holds his own in the role of Christopher and Arthur Acuña plays the part of Yasuhiro, a Japanese immigrant who works for Lilly. Ted Kōch is Charles, the local sheriff and Kevin Hoffmann completes this exceedingly talented cast as Lieutenant Rando.

The set designed by Michael Schweikardt cleverly exposes the inside of the lighthouse with living quarters at the bottom, the boy’s bedroom in the middle and the lantern room at the top. The spine of this wall-less structure is the dramatic spiral staircase. Upstage hangs a screen behind which we can see the band and where sometimes silhouettes are projected (projection design by Aaron Rhyne). Sound design is by Dan Moses Schreier, lights by Matt Richards and costumes by Jenny Mannis.

In addition to being highly entertaining and emotionally filled, Whisper House is a breath of fresh air in the musical scene. It is innovative in its concept, creative in its production and inspiring in its theme. The topic of fears running our lives rings very true today in our climate of economic challenges and international conflicts. Whisper House teaches us a valuable lesson and reminds us all to embrace, rather than fear, the unknown.