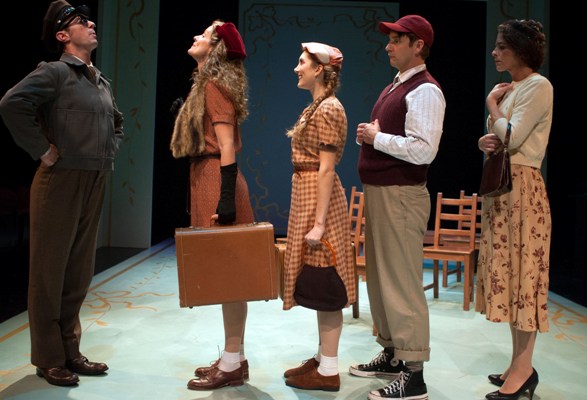 Don’t let the title fool you. There is nothing wild or racy or even very interesting about the plots of the four short plays that comprise “Wilder Times” at Aurora Theatre. It’s just a clever play on the author’s name. Incorporating Thornton Wilder’s familiar themes of youth and age, family life and misunderstanding, death and forgetting, it is at times like watching “Our Town” with different characters (and not as good).

The good part is some amazing ensemble acting by a crackerjack cast (the adjective seems appropriate for Wilder’s somewhat dated time frame), which jumps in and out of multiple roles with ease. It includes Heather Gordon, Marcia Pizzo, Søren Oliver, Patrick Russell, Brian Trybom, intern Gwen Kingston — a recent graduate of UC Berkeley — and the luminous Stacy Ross, who stands out as a series of mothers, each different and each memorable. Aurora founder Barbara Oliver directs them deftly.

Some stories are better than others. The first, “Infancy,” is a slight, rather silly thing about babies in their prams being wiser than the adults who push them, coo at them, resent them (“Life with a baby is war,” intones Ross as a Jewish mother) and are worn out by them. Oliver grossly overplays the part of an Italian policeman who is sweet on the nanny, Miss Wilchick, who reads bodice-ripper novels and dreams of a life of her own. This segment belongs to Gordon in that role. And the babies, of course, hilariously played by Russell and Trybom.

Things improve with “Childhood,” the next playlet, a funny but dark examination of children’s fantasies about wresting free of their parents. Pizzo dominates as an older sister who leads her siblings in a rousing game of “Orphans.” She is quite wonderful, as is Ross, who plays their incredibly bereft mother with hardly a word, and Trybom again as the clueless father who drinks and swears and plays golf too much but ends up as the bus driver on their imaginary journey. This one was almost worthy of Stephen King.

But things go downhill fast after intermission. “The Happy Journey to Trenton and Camden,” about a family going on a visit to a married daughter, is essentially about nothing. Little more than a skit, it is well acted, especially by Ross, again as the mother, but inconsequential. If the “Journey” is slow, “The Long Christmas Dinner” proceeds at breakneck speed, encompassing some four generations-worth of family dinners with everybody playing several parts, dying, being born, growing up, leaving and dying again. “Long” is the operative word here and one is not sure if one is yawning from exhaustion or boredom. Perhaps less would have been more, and Aurora should have selected the best three-out-of-four for “Wilder Times.” As it is, it’s a little too much of a good thing.