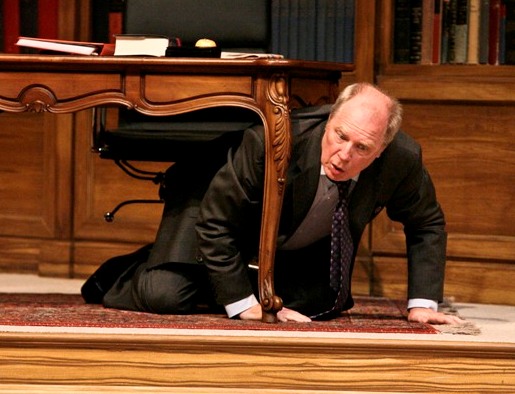 One might be described as having “flavors of sweet cherries and marshmallowy vanilla,” another as “plush, velvety,” and a third as “distinctive in a mature style, deep gold in color, flinty.

Now if wine terms were to be applied to stage plays, how would “Yes, Prime Minister” be described? Well, “lively” would be a start, perhaps followed by “refreshing,” “easily quaffed” and a “delightful aperitif.”

In other words, “Yes, Prime Minister” is to be enjoyed in the moment, not to be cellared for years or decades.

Originally a British TV sitcom series in the 1980s, “Minister” has the structure, pacing, sound and tone of TV comedies of that era. Yes, it’s been aerated with more than a few clever, contemporary gags – American CIA activities; Guantanamo; President Bill Clinton and Monica Lewinsky; Silvio Berlusconi, among others. Still, the play really is old wine in a new bottle.

It’s set in the British Prime Minister’s country estate, Chequers, some 30 miles northwest of London, where PM Jim Hacker (Michael McKean) is struggling to cope with both his nation’s economy and his own political standing. Both are intertwined and are shaky at best.

Hacker feels beleaguered and well he should, for Sir Humphrey Appleby (Dakin Matthews), the Cabinet Secretary and nominally the PM’s top policy advisor, is slyly excavating the ground beneath him.

Act I is given over almost entirely to the last problem – finding three hookers for the foreign PM – with Bernard Woolley (Jefferson Mays), Hacker’s private secretary, and Claire Sutton (Tara Summers) Hacker’s wa-hoo! special policy advisor, alternately rejecting the idea and trying to arrange it without offending the Kumranstan’s ambassador to Great Britain (Brian George) or the press or Hacker’s political foes finding out.

Act II (the play runs 2 hours, 20 minutes, including a 15-minute intermission) largely loses interest in pimping and deals instead with Hacker’s flim-flam portrayal of himself as environmentalist and global warming worrier.

Throw in Jeremy Burnham (Time Winters), Director-General of the BBC, and Simon Chester (Stephen Caffery), a BBC presenter, to flesh out the environment-global warming bit and Yes, Prime Minister began to resemble the stateroom scene of the Marx Brothers movie “A Night At The Opera.”

Jonathan Lynn not only co-wrote this play but also directed it; Simon Higlett built an impressive office-study for the British PM, while sound designers Andrea J. Cox, John Leonard and Jonathan Burke made it into a boom-boom room with some stupendous thunder claps as part of a dark and stormy night scene.