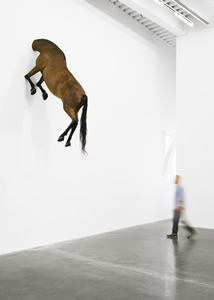 Walking over to the shimmering New Museum to see the exhibition After Nature, I stepped over a dead baby bird on Prince Street, and then some oily treacle running down the Bowery. It was a suitable overture to the show, which “surveys a landscape… darkened by uncertain catastrophe.” This clever and terrifying collection of work from a broad timeframe is organized by Massimiliano Gioni, Director of Special Exhibitions at the New Museum. (See this special online version of the exhibition; click on the underlined words to move organically through the artworks.)

An anchor for the show is Werner Herzog’s film, And A Smoke Arose—Lessons of Darkness, about the burning of the Kuwaiti old fields by retreating Iraqi troops after the 1991 Gulf War. Many of the other artworks seem to record the aftermath or precedence of some traumatic event. In William Christenberry’s photographs, kudzu vines overtake a stand of trees, looking like a band of alien bush creatures on the loose. A horse’s body dangles helplessly from the wall in Maurizio Cattelan’s work, Untitled. Zoe Leonard’s pieced-together Tree is similarly noble and pathetic. Diego Perrone’s photographs show ominous holes dug in the earth, some with obvious human hand markings, others with naked contorted men. Robert Kusmirowski recreated a facsimile of the Unabomber’s cabin, titled Unacabine.

Besides Pawel Althamer, whose work occupies a large share of one floor, humans seem to be mainly collateral damage. Artur Zmijewski’s video shows a naked male amputee being helped by another man. It’s at first repulsive, then empathic. Dana Schutz uses a bold, expressionistic painting style in Man Eating His Chest to make this mortifying image feel like a latter-day fable. In a live performance piece by Tino Sehgal, a woman lies in an alcove, rolling and twisting slowly while eyeing her viewers creepily. Berlinde De Bruyckere created a half-human, half-root being that lies mummified in a vitrine. And Roger Ballen’s b/w photos draw on our deep visual memories of Abu Ghraib, without truly recording any torture.

Gioni curated an exhibition of the Althamer’s work in Milan last year, and took this opportunity to showcase this Polish artist’s obsessiveness here. Althamer refutes mortality in a series of self portraits and other sculptures. There are several likenesses of himself – at different ages, in various materials, including animal hides and parts. A facsimile of his “skin” hangs like a flight suit, grimly offering its services. A tiny sculpture of a fetus sits atop a wooden column, at once chilling and hopeful.

Interestingly, Roberto Cuoghi’s largely abstract, diminutive mixed media paintings manage to distill the essence of the show. The series is titled “Axis of Evil,” and depicts the outlines of said countries. Layers of glass, minerals, and pigment combine to evoke scorched earth, cesspools, spy satellite photography, borders in flux. Sometimes subtle abstraction can be more powerful than any real representation.