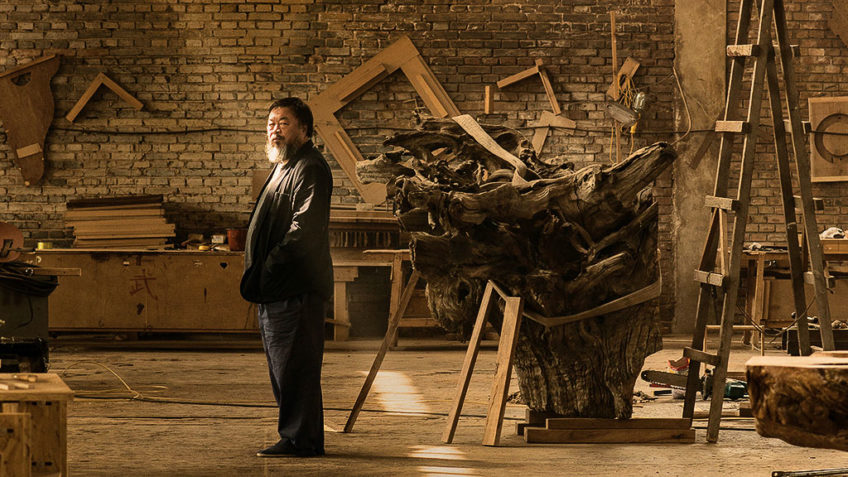 Ai Weiwei is a global phenomenon. As well as being one of the most recognizable artists working today, he’s famous for his outspoken criticism of the Chinese government and in particular of its record on human rights. So great is his renown as a dissident, in fact, that in recent years it’s almost seemed to eclipse his art. Now, though, Ai’s work both as an artist and as an activist can be assessed in this major retrospective at the Royal Academy.

You get a good idea of Ai’s preoccupations from his response to the Sichaun earthquake of 2008. Convinced of an establishment cover-up of sub-standard school construction, Ai turned to social media and appealed for volunteers in order to get to the truth. The room in the show devoted to the disaster includes Ai’s film documenting the immediate aftermath, together with vast hoardings displaying the names of over 5,000 victims traced through his “Citizen’s Investigation”. The main installation, “Straight” (2008-12), is formed from ninety tonnes of rebar – the steel rods used in reinforced concrete buildings – all salvaged from the site and painstakingly straightened out by hand to create a monument to those who lost their lives in the tragedy.

Nonconformity is in Ai’s blood. His father, Ai Qing, one of the most celebrated Chinese poets of the 20th century, was detained during Cultural Revolution and Weiwei, born in 1957, was raised in a remote labour camp. Conditions in China improved temporarily after Chairman Mao’s death in 1976, and Ai was able to travel abroad, spending over a decade in the United States (1981-1993), mostly in New York City. His exposure to Western art, particularly the works of Marcel Duchamp, whom he reveres, is reflected in the conceptual pieces he made after his return to China. More recent works, particularly those made from reclaimed materials, seem to me to owe something to contemporaries such as U.K. artist Rachel Whiteread. Western influences, however, are combined with a quirky inventiveness that is all Ai’s own. Not many people, for example, would have thought of creating a chandelier from, of all things, bicycles.

A recurring theme in Ai’s production is the tension between old and new, and in particular the place of traditional Chinese art in modern culture. This emerges most obviously in the room devoted to his ceramics. Alongside the inevitable montage showing him famously “Dropping a Han Dynasty Urn” (1995), and an ancient vase employing the Coca-Cola motif, there’s also a large display of pots, over which Ai has rather unceremoniously slopped multi-coloured industrial paint. Works like this, many of them specially constructed for the show, raise questions about authenticity and value in contemporary art.

Ai loves working with, and transforming, traditional materials such as jade, marble and porcelain. There’s a display of metre square cubes, which apparently are used as standard measures in Chinese construction projects. Here, though, Ai has appropriated them as a medium for his minimalist approach to art. One is constructed from rosewood, another from crystal, a third – I had to check the wall label to discover this – from compressed tea. The pièce de résistance, though, is undoubtedly the exquisite “Treasure Box” (2014), an old-fashioned Chinese puzzle crafted from rare huali wood.

Going round the exhibition, you’re constantly struck by the playful element in Ai’s production, amidst all the chronicling of disaster, wanton destruction and corruption on high. Ai never preaches, and though his work is often provocative, he seldom sets out deliberately to shock; he’s far too subtle for that. (You shudder to think what Jeff Koons, say, or Damien Hirst, would have made of some of the ideas in this show).

Never out of the news for long, Ai was in trouble again in 2011. Arrested at Beijing airport as he was about to get on a flight for Hong Kong, his passport was confiscated and he spent 81 days in detention without charge. The last room in the show chronicles his artistic response to this latest, ham-fisted attempt to silence the Beijing government’s most outspoken critic. It consists of a series of rusty crates, in each of which, through a spy hole in the roof, you look down on the recreation of a half-scale Ai in the living conditions he experienced during his incarceration. In stark contrast to these grim, bunker-like blocks, the gallery itself shimmers with gold wallpaper featuring the Twitter bird motif enclosed by handcuffs and surveillance cameras.

This landmark exhibition is the first major survey of Ai Weiwei’s work in the U.K. Given Ai’s cachet and the sheer quality of the works on show, it’s a guaranteed hit. It’s also a pretty safe bet that the Chinese ambassador won’t be visiting.