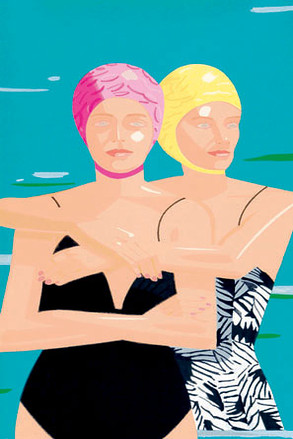 Since I won’t be able to catch this show in the flesh — though I’ve
seen a number of its paintings several times — I’ve decided to
approach it as an essay on my experience of Katz’s work over the years.

Looking is such an ingrained habit that we hardly notice that we’re
looking even when we’re looking.  But whenever we do we’re always
interpreting, focussing on this rather than that, or even eliding
things, so looking’s as selective as memory, or our state of mind –
say me rushing to my barber so I forget to notice the clock on the wall
which has always been there in his shop.

Paying attention is the key, and Katz’s art has always been about a
specific kind of attention. Davd Moss, in his excellent catalog essay
puts it this way. ” When Katz says … he wants ‘ style to be the
content, ‘ he is articulating his ability to simplify the image of
painting in order to magnify perception”, and perception, as an ongoing
experience, is central to his work.

This show, of course, charts Katz’s working process, and there’s
something progressive, almost serial, or film-like about it — long
shot, medium shot, close-up, extreme close-up – which is something that
often happens in the staged reality of his art. It’s certainly at work
in his painting of Paul Taylor’s dance — he did the costumes too —
LAST LOOK ( 1986 ), which I’ve seen here in San Francisco at Erika
Meyerovich and in his NY studio. And the steps he takes to achieve its
final resolution, which are outlined in the catalog, are like
storyboarding a film. He catches on the spot gestures in ink drawings,
adds nuance in pencil ones, design and hue in oil on board, and uses
pounced on paper cartoons — an Old Master technique used by
Michelangelo for his Sistine frescoes — to outline the areas to be
filled in on the waiting canvas. Katz has also designed the painting
like the dance itself — I’ve seen a video of it — which frustrates
our desire to take the whole stage picture in with a Mylar partition
set which replicates and doubles the dancers’ angular gestures, moving
into the frame and retreating at the same time, which of course mirrors
how we perceive whether our vision’s blocked or not. Katz’s
finalization of the live performance as a set in time work is as a
series of 5 disjunct yet interlocking panels which contain without
explaining. He employs similar tactics in another seminal collaboration
with Taylor, PRIVATE DOMAIN ( 1969 ) where the set was slit panels
masking the stage — I reviewed Taylor’s visit here last year with it
for www.culturevulture.net, dance — behind which the dancers moved,
though the painting Katz made of it was an open view of the performers
in various configurations in close-up and long shot, their gestures and
eyes meeting and deferred, full of sex and dream.

Seriality is also at work in the overhead spot lighting of Pamela in
the lithograph series NIGHT: WILLIAM DUNAS DANCE 1-4 ( 1983 ), which I
also saw at Meyerovich, with its cropped views, and the pencil to
cartoon versions of it in the catalog show how Katz  has paradoxically
both refiined and stylized these images into something more immediate
— through a heightened use of color —  and meditative. The cropping
in the double portrait LAURE AND ALAIN ( 1964 and 1991 ), which I saw
at Katz’s studio — he told me, his wife and frequent model Ada was
there too, that he wanted to see if he could do better — though the
powerful sense of intimacy and monumentality the picture radiated live
is lost in the catalog, which is funny because you’d think Katz’s
paintings with their pared down detail would register in reproduction
but they don’t  That, and the faces — he’s in profile, left, she’s in
three-quarter view right — seem paradoxically resolute and resigned,
by very subtle different degrees, in both, He’s lost her, or has she
lost him, or does she still want him, and he want her? And while these
questions aren’t ones Katz is interested in answering — he wants the
painted facts to speak for themselves — these perceptual things
provoke responses from within the painting, and from within the person
looking at the painting.

Or from the person inadvertently observing the “subject” of some of his
work as I seem to have any number of years ago In New York. A pretty
chic young lady, just a split second as she turned her head in profile
with supreme confidence, but not hauteur ( itals ), as she crossed from
a side street onto Madison, in slowly shadowed late afternoon light.
And it clicked — so that’s what Katz is looking at, and how he sees,
though getting that split moment right can take all the art he can
muster.