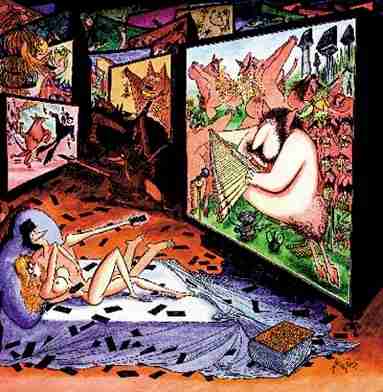 What distinguishes cartoon art from art in general? Humor, of course, seems to be the key factor, and probably the very one that so inhibits the acceptance of cartoon art in "serious" art circles which are generally so freighted with the gravitas of their scholarly artspeak that cartoon art seems to be precluded from critical consideration. As well, most cartoon art is made specifically for publication and publication generally signifies a mass market. The art establishment seems to prefer the rare, the one-of-a-kind; a mass art form threatens their turf of exclusivity, the protection of their union shop.

And yet, museum-revered artists from the past have surely prefigured modern cartoon forms (the caricatures of Daumier, the satirical etchings of Goya) and contemporary artists such as Lichtenstein and Warhol have appropriated the imagery of cartoons into their works. Lines of demarcation are often hazy, if not downright counterproductive.

Since cartoon art generally has received short shrift elsewhere, small museums have sprung up specifically to showcase this art form. A visit to an exhibit like the Arnold Roth retrospective should prove a delightful surprise to believers and skeptics alike: Roth is a master of the form and seeing his superbly rendered original watercolors and ink drawings provides an immediacy that propels his already acknowledged wit into the realm of the masters.

Organized by The University of the Arts in Philadelphia, in conjunction with the Ohio State University Cartoon Research Library, Arnold Roth: Free Lance features approximately 70 works, grouped here by the publications in which the cartoons appeared. That arrangement leads to an impression that Roth, consciously or otherwise, seemed to adapt his style for the tone of the magazine. Of course, it may just be the other way around–that it was his style that influenced the magazine. Either way, his New Yorker cover, "The First Pitch," in which a badly thrown ball rolls along the ground towards the plate, while batter, catcher, and umpire look on in some amazement, has the inimitable tone of a New Yorker cover (wry, understated humor and a canny capturing of the essence of an iconic moment) as well as the graphic look of many New Yorker covers–clean lines, flat color surfaces.

But when Roth drew for Punch (see black and white to the left), which he did for many years, he used a sketchier style, with an energetic, edgy line that calls to mind etchings of an earlier age, as does an ink drawing he did for Christmas, 1963. Roth functioned as an American correspondent for Punch, his cartoons often commenting on current phenomena in the U.S.–"The War Between the Smokers and Nonsmokers," for example, and "Papal Bull," commenting on the Pope’s visit in 1979.

When he drew for Playboy (color, to the left), not only did the subject matter fit the publication, but the look of the cartoon shifted once again. His wordless commentary on the invasion of electronics into modern sex life is the essence of effective cartooning.

Caricature shows up repeatedly (Tina Turner, Jimmy Carter, Reverend Al Sharpton) as do puns, word play, and gender jokes. "The Original Pushers Have Returned to Washington Square" shows the park full of mothers and nannies pushing carriages, a nurse pushing a patient in a wheelchair, a child pushing his wagon, but no sign whatever of the drug dealers who seemed to own the Square for so long. A doubly funny joke is a cartoon of a dressed-up woman entering the ladies room, observing with a touch of alarm a man in drag exiting the men’s room. The man in drag is Klinger (from M.A.S.H.) and he is wearing an outfit identical to the woman’s–dress, hat, purse, shoes. It’s a riff on an old joke, perfectly fitting the provenance of the cartoon, TV Guide.

Some of the works included in the exhibit stand out especially in purely artistic terms. A linoleum cut portrait of Carl Zigrosser, an important print curator of the early twentieth century, shows him standing at the base of a huge flight of stairs, suggested simply by a sweep of horizontal lines. At the top, smaller because distant, like the palace of the gods atop Mt. Olympus, is the Philadelphia Museum of Art. "Stress," a watercolor from 1986 shows Roth’s skills as a colorist, the bright red background setting the emotional tone for the strung-out character sitting at his desk. It borders on the surreal; other Roth works as well ("Euphemisms," for example) suggest the influence of Dali.

It isn’t often that visitors to an art gallery from time to time break out into delighted guffaws as they wend through an exhibit. That’s the rule rather than the exception here and speaks volumes about the power of cartoon art to communicate. No one does it better than Arnold Roth.