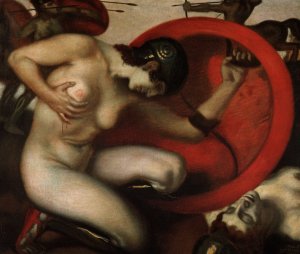 Curatorial intern Adrian Sudhalter has chosen five paintings, mounted in the foyer to the Before Expressionism exhibition, around which she organizes the entire exhibition. Each work contains a mix of aesthetic elements, demonstrating both common basis in and divergence from the academic tradition of Germany at the turn of the 20th century. The counter-tendencies, boldly proclaimed by self-identified "secessionist" artists, include naturalism, symbolism and idealism, and the grotesque (including parody and caricature).

As one bookend stands Paula Modersohn-Becker&#146;s Birch Tree in a Landscape. Autumnal greens and yellows fill a flat landscape, a serene vision of northern Germany and the setting for a simple, denuded birch tree. An early impression made by the artist upon her arrival in the Worpswede artists colony outside of Bremen, the significance of the painting lies in its natural portraiture&#151;landscape is not background, but rather the subject of the painting. The "chaste nudity" of the birch implicitly suggests a portrait of Modersohn-Becker as a delicate, slim, delicate, languid, graceful "modern woman."

As the other bookend, Arthur Kamp&#146;s Portrait of the Emperor Wilhelm II of Germany is heavy. The Kaiser, having formally composed himself as imperial ruler, stands with his chest thrust out, his right hand in a fist resting against his hip, and his right arm jutting out toward the viewer.The heavily-laded uniform regalia, the golden eagle crowned helmet, and the Kaiser&#146;s sternly composed face all seem to glower at the viewer. The Kaiser&#146;s steel blue eyes, the large epaulet thrust into the viewer&#146;s eye, the carefully groomed mustaches which bedeck the Kaiser&#146;s face all shout Prussian bravado. With a single sweeping cast of the eye, it can easily be understood what the artists of the new century sought to secede from&#151;aesthetically, politically, and socially.

The first painting encountered upon entry to the exhibition is Franz von Stuck&#146;s Wounded Amazon, a remarkable balance between sublime and kitsch to the contemporary eye. Executed in the German Arts and Crafts style, known as Jugendstil or Seccessionist, it is the portrait of a naked Amazon warrior in the middle of a battle with centaurs. She is crouching behind her shield. The backside of the shield creates a stylized, formal background, and two centaurs, bow and arrow drawn, are positioned ornamentally at top left and right of the painting. A pale white, and presumably dead fellow Amazon lies face up, one breast exposed, in the lower right corner. The Amazon balances herself on her left knee, and her right arm props up the maroon shield. With her free right hand, she offers up the nipple of her naked right breast.

While the dark and ponderous feel of Stuck&#146;s painting reflects the overstuffed furniture and overheated rooms of Wilhelminian society, his stylized arrangement of the image, the Jugendstil palette of maroons, reds, and ochre and salmon flesh tones, and the "almost feral sensuality" point toward the abstracting visual language soon to come.

The two remaining pieces&#151;Wilhelm Trubner&#146;s Portrait of Fraulein Maria Wusthoff, in the naturalist manner, and Lovis Corinth&#146;s utterly lascivious and decadent Salome–embody the polarized counter tendencies of the new Secessionist aesthetics. A blonde-haired Fraulein Wusthoff in a white dress is rendered in broad, flat brush strokes against a blackish and dark green tree. She holds a broad-rimmed garden hat at her waist. She is, only coincidentally beautiful and interesting; she is, primarily, an unpretentious subject. Trubner seeks beauty in his manner of representing in a frank and unidealized manner.

Salome is everything the Fraulein is not. Indeed, Salome is perhaps the only good-time gal in the lot. Corinth captures Salome running her jewel-bedecked fingers over the face and lips of the beheaded John the Baptist, as if poking through a choice cut of meat before ordering it roasted. A hairy-chested servant holds the head-filled bowl up for Salome&#146;s inspection, and members of her retinue peer curiously over her shoulder, delighting in the sight of such an Epicurean trifle.

The rest of the exhibit is comprised of mostly small and lesser pieces, including sketches, pencil drawings, and black-and-white lithographs. There is a simple self-portrait by Kathe Kollwitz&#151;a woman sitting with open book on the table, and a reading lamp above her head. There are several lithographs from Max Klinger&#146;s On Death, Part One. Road, for example, consists of a simple rural road, a wooden hand rail on the left and row of skinny poplar trees on the right. In the foreground lies on its back the body of a man in a suit, feet and belly visible to the viewer. The image is sad and wistful, but also whimsical and humorous.

More deadpan is another print from the series. It calls Edward Gorey to mind, with a nanny sitting on a bench along a country lane, a field and a line of tree behind her, and a baby carriage by her side. Titled Child, the reader is to surmise that the infant has died and, perhaps, the nanny does not yet know this. Contrast this with a series of eight post cards by Emile Nolde&#151;caricature cartoons of Swiss mountain peaks as gnomes, elves, and mountain spirits. They are good, clean, simple middle-class fun, and their commercial success brought Nolde the funds to give up his job and devote himself full-time to painting.

The Busch-Reisinger Collection was begun in 1903 and many of the exhibited works have been a part of the founding art collection at this Harvard University teaching museum, which has played "a seminal role in shaping the study of art history at Harvard, and, in turn, throughout the United States." True to German intellectual tradition, the current exhibit packs a great amount of cultural history&#151;political and aesthetic&#151;in the nearly three dozen works mounted here. The Before Expessionism exhibition contains primarily small-scale works, which were mostly executed in black-and-white media. Together they serve as an orientation to the impressive, extensive, and incredibly thoughtfully selected collection.

(9225)
$6.43 (as of January 26, 2021 - More infoProduct prices and availability are accurate as of the date/time indicated and are subject to change. Any price and availability information displayed on [relevant Amazon Site(s), as applicable] at the time of purchase will apply to the purchase of this product.)

(41289)
$9.98 (as of January 26, 2021 - More infoProduct prices and availability are accurate as of the date/time indicated and are subject to change. Any price and availability information displayed on [relevant Amazon Site(s), as applicable] at the time of purchase will apply to the purchase of this product.)

(18970)
$4.89 (as of January 26, 2021 - More infoProduct prices and availability are accurate as of the date/time indicated and are subject to change. Any price and availability information displayed on [relevant Amazon Site(s), as applicable] at the time of purchase will apply to the purchase of this product.)
related posts