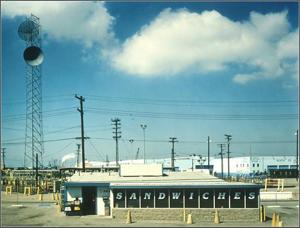 The Friends of Photography

Nora Kabat, curator of Beyond Boundaries, posed the question, "What is the most compelling photography made in California in the last five years?" Over 70 photography experts were polled and submitted nominees from whose work this stimulating, revelatory exhibition was drawn. (The show auspiciously marks the reopening of the Ansel Adams Center in new quarters in San Francisco.)

The photographs are organized by related themes, some connected by subject matter, some more abstractly by technique or viewpoint. There are a variety of works, for example, that explore landscape, with the Southern California urban landscape particularly well represented by artists such as John Humble, John Divola, and Robert Flick.

Humble is caught up in the imagery of ordinary places framed by backgrounds of power lines and telephone poles. The plain tackiness of a sandwich shop or a motel swimming pool directly under the power lines creates a subtle tension; Humble finds beauty where it is, perhaps, more often overlooked. Divola’s "2800 Block, Western Avenue," shows a seedy street of one-story shopfronts, indicative of the lives of people who are totally absent from the picture–a Latino bar, a chiropractic office, a motorcycle club, a thrift shop. There are unidentified addresses, too, that lend an air of mystery. All of this comes together in a large, brilliantly colored photograph that is meticulously composed. Flick takes multiple pictures of contiguous scenes (buildings, trucks, a bridge, palm trees) and mounts them serially in rows; one in "Long Beach Harbor," another, "Huntington Park"–20 rows of 30 miniature photographs each, creating a collage effect, a highly textured tapestry that is representational in its detail, but becomes an abstraction from several steps back.

Outside of California, one of Robert Misrach’s elegant prints from the series "Cancer Alley" captures a sense of threat in a poisonously green swamp crossed with the powerful horizontal slash of a rusty pipeline. Michael Kenna’s photographs of English power stations offer literal images which, with a shift of focus, are abstractions of the conical shapes and the smoke billowing from chimneys.

The landscapes/cityscapes, from a traditional basic stance of photography, work from images found, though artfully chosen and composed and with a distinctly contemporary viewpoint. Another group of works are loosely associated by having been staged specifically for the camera; it extends the creative act beyond the shooting of the picture to the manipulation of the subject matter itself. In Michael Lewis’ wonderfully strange not-so-still life of a glass of milk, the milk seems to defy gravity in the odd angle of its surface. Surrounding the glass are an overripe banana, crumbs, half a lime, and a straggly house plant, all against a background of striped yellow wallpaper, surely a deliberately assembled group of components. The implied movement of the milk stops time, capturing a moment–also very much a part of the tradition of what photography does. If the angle of the milk evokes speculation about how it got that way, Lewis’ picture of a burning cigarette perched on the edge of a table shifts the time focus from what just happened to what will happen next–the imminent fall of the long ash.

Staging is one way to manipulate content to achieved a desired effect; manipulating the photo itself in the darkroom is another. You won’t know it to look at the pictures, but Susan Silton’s brilliantly colored expressionist abstractions are pictures taken of old bird guides, then smeared in the developing process– there’s not a bird to be seen. Richard Barnes takes views of the Unabomber’s cabin from four different sides and places them on plain black backgrounds, removing them from geographical context, creating a strange, mysterious effect. Kim Brown, from a series called "everything turns into something else and slips away," shows a toy animal in #8, faded out and blurred; #9 has faded even further, the subject almost unrecognizable, the result more abstract.

The intent of Beyond Boundaries was to showcase California photographers. In finding so much work of such high quality, the exhibit transcends that limited goal and suggests the extraordinary inventiveness and vitality of contemporary photography; it’s a multileveled exploration of the medium itself.