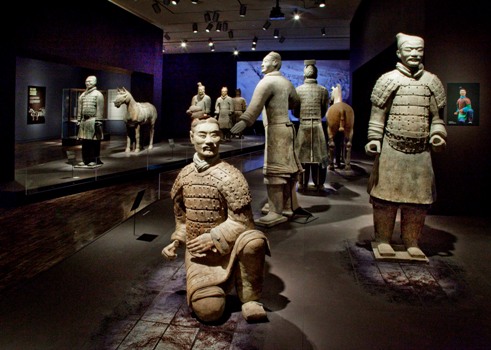 Everybody knows that you can’t take it with you. But, if you are the powerful Qin Sihuang, First Emperor of China, you sure can try. Buried more than 2,000 years ago with some 4,000 replicas of his foot soldiers, archers and horsemen (complete with horses), the founder of the Qin Dynasty— the man who essentially unified China— came close to achieving the immortality he sought.

Discovered by accident by a handful of farmers digging a well in Shaanxi Province in 1974, the emperor’s tomb site has yielded a trove of historical and artistic treasures and has been called the Eighth Wonder of the Ancient World— and still digging. More than four football fields (almost 250,000 square feet) in size, the site holds four active pits with archeologists working in all of them. In addition to his army, the emperor’s mausoleum included a palace, stables, an armory and even a zoo.

Most spectacular among the ceremonial swords, bells, bridle ornaments and daggers on display are the ten larger-than-life sized figures— eight warriors and two horses (the maximum number allowed to be exported for exhibit by China)— in the last of three halls devoted by the San Francisco Asian Art Museum to the show. Free-standing, the soldiers look ready for battle. Visitors have an unprecedented chance to examine them, up close and personal, without any barriers. It is a little eerie, like walking through history, but beautifully displayed.

Much has been written about the fact that no two of the thousands of figures look alike and, when you walk around them you can see that each man has his own separate character. Stunning as they are in the mud-colored terracotta, the remnants of colored paint that have survived on The Kneeling Archer (his face is green, suggesting that he may have had magical powers) lead you to imagine how all of them must have looked in their original glory. There is a sense of immediacy. Hands are clenched or stretched out or, in the case of the general, resting on a sword that is no longer there. The horses look ready to gallop away.

The first two rooms of the exhibit provide historical and philosophical context through the use of maps, a video presentation and time lines that help you understand how a ruler, who came to the throne at 13 and didn’t rule too much longer after that (221-206 BCE), unified the warring states that then made up China through ruthless conquest and wise standardization of currency, measurement, writing and ritual. There also are priceless artifacts in these galleries— a spectacular quartet of metal water birds, weapons and an intricate bell.

Mounted in honor of its tenth anniversary at the present Civic Center location, the museum did host the Terracotta Warriors at its former Golden Gate Park location in 1994. Even if you saw it then, it’s worth another look.